Last mote, nearly dead, but enrage timer, four dps alive.
It wasn’t going to end well but it was a bloody good go and we all were feeling the hype for what could have been our first Tectus kill. Even though we didn’t get it down we still have a lot of laughs during our escapade.

The run in was eventful, there was a whole army of Horde waiting outside the entrance to bludgeon any poor Alliance trying to get in. I was hit on the first set of steps going up and went to find my corpse. Running back I found it with two Hordies stood around it, waiting for me. I wandered up the second set of stairs closer to the entrance waiting for the ‘resurrect now?’ button to disappear, signalling I had gone too far away. I slunk up through the Horde, the button still there, was I going to be this lucky? I was up at the entrance, the button still in the middle of my screen. I clicked it, looking forward to just taking one step and being out of their way. “You are too far away” what? the button is still there! I backed up slowly and kept spam clicking it. My character announcing to me everytime that I was not in range… My last click ressed me right in front of a Hordie who was looking down the stairs. Mounting up and bolting for it I got in with only a scrape.

Izzet however wasn’t so lucky. He got killed and found his corpse but couldn’t res at all. No matter where he stood he couldn’t get the button to show up. After lamenting over ts about it Blunnerz decided to kill himself and then go find him to res him manually. Blunnerz got out and when he released his spirit, he found himself quite some way from where he should have been.
“I’m back at my Garrison. What the shit?… I’m now flying back to Nagrand…”
Xerath decided to go find him instead although Blunnerz did reassure Izzet that he was on his way to res him.

When Fenrir logged on, he was aware of our running in woes and out discussion about going in the back entrance to avoid the Horde.
“Maybe they will grow some balls and go in and actually do some raiding?” I said, getting fed up with them just hanging around and being annoying.
“You could run in like a boss” Fenrir said as he landed from his flight path and started running towards Highmaul. “Oh there is a lot of Horde… And I’m in! Like a baawwwwsssss!” 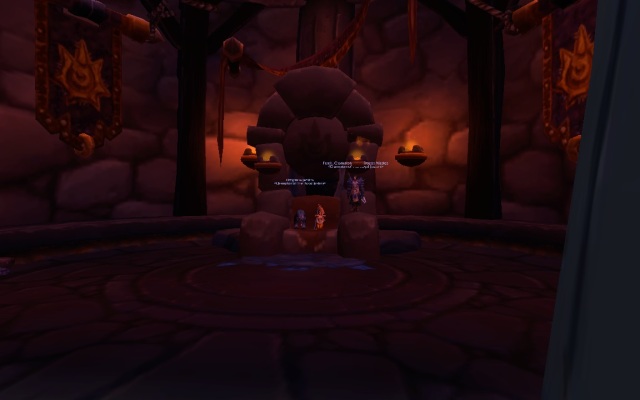 While waiting for Ant to get in, I had a gallop around to see what there was in the arena. I found a throne. Announcing it over ts I was soon joined by Gio and Fenrir. I moved up a bit so Gio, in Kitty form, could squeeze in next to me and Fenrir stood on the arm of the throne. In the mean time, Ant had got in and a ready check went up, which resulted in us all running out of the hut and hurtling to our positions like naughty children who were somewhere they shouldn’t have been and trying to scramble back before their parents notice.

From my Alchemy Lab and my worker, I had acquired some Transmorphic Tincture potions. We had joked about Rawls being in his new mog and that he was wearing a dress again. “It’s not a dress… It’s a robe…” Many people disagreed. “how can you be a big strong tank when youre wearing a dress?” Fenrir asked. “I look more like a Monk in this, before people kept thinking I was a rogue!” Rawls declared.
We wondered what he would look like as a female, especially in his robe. He took the potion and the results were quite magical. 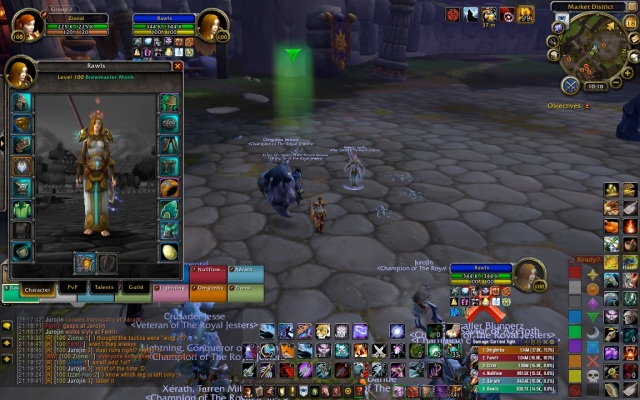 “You look like a princess!” Ant cooed. There were several ‘awww’ noises floating over ts. A ready check went up, and everyone was good to go.
“When you’re ready, Princess…” Fenrir joked
*Pull in 10* – The Princess was ready to kick ass!

Every pull we did, we got closer and closer to a kill. People were still getting confused about left and right so we settled for going Green or going Blue.
A Crystalline Barrage had me somewhat trapped up against a wall but before I could negotiate my way around it I was pulled forwards and then found myself flying through the air backwards and landing into the shit left on the floor.
“Oh…” Blunnerz said
“What the fuck is going on?” I laughed, totally confused by what just happened. “Did you just pull me into a piller?”
“Erm, yeah!”

We were running back after another attempt and all of these mobs appeared.

“Where did these all come from? Did we pull all of these?”
“Yes we did”
We kind of got the mobs under control when something else crashed the party.
“Where did this Void Walker come from?!? Showing up late to the party!”
The tanks got destroyed and it was left to Jesse to tank it, which he was mighty proud of, and It did eventually die. Then something magical happened.
“WE GOT A CLOAK!” Blunnerz announced to cheering over ts.
“Heres to our first cloak!” I said to more cheering.
While waiting for everyone to eat and flask up after this Blunnerz had a little brain fart moment.
“Which way is everyone looking? Oh never mind” He said, secretly answering his own question.
“Are we having issues with left and right again?” I asked.
“…Yes.”

Blunnerz also found yet another hole to jump in and somehow managed to find himself trapped between two walls. All you could see was his marker bouncing around as he tried to get out again.

We all ran around on the wall to find him. You could just make him out through the crack. Who knows how he managed to get in there but he did. I suddenly backed away.
“Aww. You’re not in my line of sight” he lamented.
“I knew that was coming so I started to back off!”

Somehow, he did manage to escape but curiosity had gotten the better off him as he was sure that he could get somewhere between the walls. So after our final try he went back while we all stood on our mounts to see where he ended up.
“Has anyone got a two person mount so I can get back out?” He asked.
“I do” I said wondering how this was all going to work.
“Mount up”
Xérath put up a portal right in front of me.
“Damn you Xérath and your portals! Now I can’t click Ella!”
Luckily for us, the portal went to Stormshield… And not Theramore!