Tuesday was our last lockout day before we made the decision to clear again or to extend. We were on twins.

We made our way over and the usual conversation started on ts.
“Is there Horde there?”
“Yes”
“Yeah there’s a million of them”
“Run in like a boss”

I’d landed at the flight path right after Danue and started following her in. There were a lot of Horde that’s for sure. As I take so long to load up, I’d been attacked on my way over by a mob that I couldn’t see, crossing everything that the scenery would load properly before I got to the entrance I arrived at the steps on my invisible mount with only the dots on my mini maps as clues as to how many Horde were there. Running up, I still couldn’t see any players, but I charged forward and slammed myself into an invisible wall where the portal should have been. Obviously I got targeted. An Alliance player flailing against a wall was too good of an opportunity to pass up. Just when I thought I had met my doom and would have been the first casualty of the night, the big glowing circle appeared around me and my loading screen popped up. Take that suckers!

There was a little congregation of people on the top step before the hallway trash for the twins. Someone threw a zeppelin at me and as I was mounted, I managed to confuse it by running around it in a circle until it disappeared (I did at some point completely miss another one being thrown at me and only realised when I opened my bags some time later) we waited for the rest of our merry bunch to make it through the gauntlet of Horde, some decided to pass the time shapeshifting with toys and playing with robots.

Watching them fight it out in their tiny death match it reminded me of a program I used to love.
“It’s like watching Robot Wars…” I mused.

All of a sudden I had two of Blunnerz stood in front of me. I didn’t really pay much attention until Danue changed appearance… And looked like me. Gio arrived and he looked like me. And then Blunnerz… What the hell was going on?

Wait a moment. I look like Marvv…
There was a whole lot of changes going on and no one was saying anything about who was doing it.
I was quite impressed with the Goren. It was quite cute rolling around. While wandering around to see everyone I got turned into and and was rolling my way through people’s legs. Awww yisss.

Everyone had arrived and whatever state we were in we started.
To be honest, I don’t think we were paying much attention to the mobs and were just concerned with what we looked like. I got turned into Rawls (who had stepped out of his Princess dress and put on his ninja costume)
“OI!” He said. “You’re no ninja”
“I’m a tank!” I gleefully replied. As Jolly charged-rolled up the corridor to meet the big add as a goren.

Distracting as it was, we did manage to get all the mobs in the boss room down and started to gather at the back of the room. Going through tactics and setting out our markers we and a final run through in raid chat.
Tanks at Blue,
Ranged at Green,
Whirlwind to Red,
It seemed simple enough.
“Rawls red is the cross” Blunnerz added on ts.
“I know that…” Rawls quipped.
“Haha, yes please don’t take whirlwind to green” I laughed.
“Kill all of the Ranged…” Fenrir added a little too enthusiastically.

Naturally, we cocked up somewhere along the lines and it all went a little wrong. A tank died. And then another one. And then whirlwind went to green…

Dusting ourselves off we ran back. Ate, rebuffed and checked flasks etc all in record time. It was as though if we were quick enough ‘resetting’ then it didn’t count.
It was at that point that someone got creative with one person who happened to be in wolf form.

And it resulted in this.

Still with the majority of us completely in the dark about how this was happening. We suddenly went from ‘raid mode’ to ‘PUPPIES!’ in about two seconds. It was magical, little doggies running around, sniffing, having a scratch.
“What is doing this?”
“How are we turning into Wolves?”
“LOOK AT ALL THE DOGGIES!”

Turns out, jewelcrafting can provide something much much better *cough* than gems (who needs those anyway!) The delight that is Reflecting Prism And as you can see were not the only ones to have dabbled in the art of ‘Raiding with Wolves’

Once everyone was a wolf there was only one thing left to do. Line up and dance!

Cute as it looked, there was something missing…

Moon Moon!
In my haste to get screenshots I’d manage to accidentally open a ton of tabs and activate Aspect of the Fox… It could have been a lot worse, it could have been Hero I set off (not that I’ve ever done that before *cough cough*) 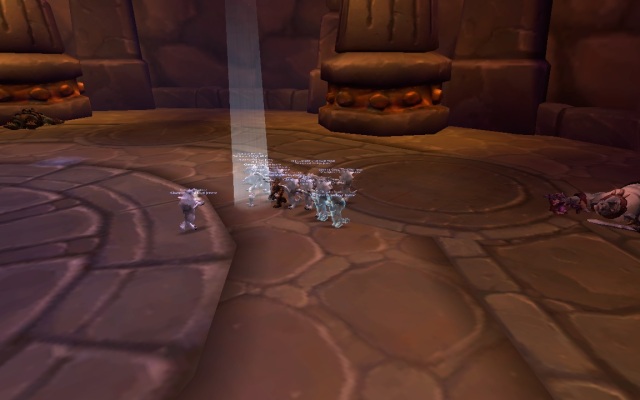 With all of us dancing away and silently watching our majestic group. Raiding had certainly been forgotten about four a while.

That was until Narlos got over excited and one can only assume tried to hump the bosses leg.
Our dance was abandoned as the wolf pack tried to run for the door. 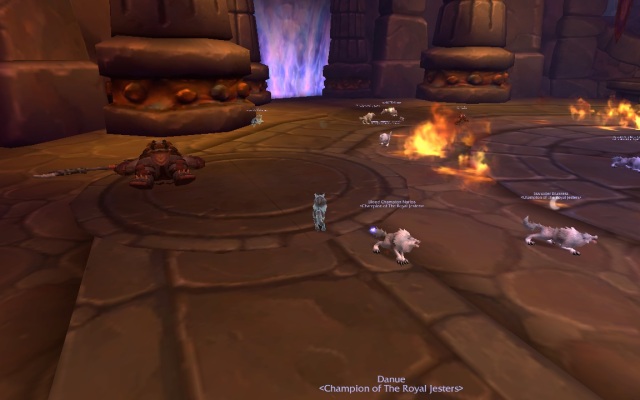 It was carnage. We were running around everywhere. I forgot I could still attack… It was only when I got a heal that I remembered. 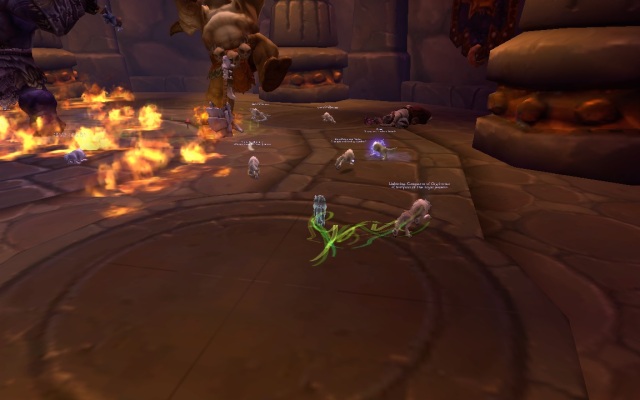 It’s safe to say that the Wolves never made it. Although we did get the stupid boss down after that, for the rest of the raid we didn’t change into Wolves again…

Ko’ragh
Truly living up to the huntard name, for some reason I could not work out the mechanics for this boss. The shield in particular. I resorted to whispering Blunnerz many times to clarify what I should be doing and when. Looking back, I thought that you couldn’t go into the circle in the middle until the boss ran into it… derp.

We kinda had a plan for this. We were going to run right every time we had the big shit circle on the floor. Considering how many issues we had with left and right last time on Tectus I was skeptical this was going to work.
First plan was to eat a lot of food.

After Xérath was convinced I wasn’t dead as I did eventually click ready we all agreed to poke the boss and see what happened.
Poke we did and death happened.

When we decided that stacking loosely wasn’t working we spread out. Insta-death to a tank and wipe number two was in the bag.
Setting up again on this try we got a shit circle to land half in and half out of the central bit. It was quite handy for the adds and still left the soaker enough room to stand. When we wiped on that attempt we had a brain wave.
“Can we force one of them there and then spread out?”
“We can stack on the first fire and then use a cd?”
Two seconds later we were dead.
“Ok that didn’t work”

Spreading out again we had another crack. But something was telling us that tonight wasn’t going to be our night. We just all seemed to be out of sync. We couldn’t get a grip on the adds, one minute the tanks had them in a shit circle and the next, they were running around eating people.

I was still all very confused about the whole orb thing. I couldnt for the life of me work out what was my cue to go in and as Blunnerz have the call out prompt for the next one to get ready to run, I lost my head.
“Who? WHO IS GOING IN!”
“me, I’m in” Narlos announced. Cool as a cucumber.
In my flapping around for some reason my brain told my fingers to make my char stand on the green swirly shit.
Boom. Dead.
“Oh for fucks sake…”
I couldn’t help it. I just laughed.

While we were having a mini meltdown about why the fuck this thing WASN’T DYING on our ressing from the last wipe, Blunnerz decided enough was enough and I agreed, so did everyone else. We still for some unknown reason, ran back to the boss room and took up our positions. Fenrir decided to leave us with a little momento and pulled the boss.
Lightning bubbled and hearthed while the rest of us stood their trying to get out alive.
“Did lightning just bubble – hearth?”
“Yes, yes he did”
“Haha jammy!”
*Boss goes mad and obliterates us*
“Aw, I was two seconds away from portaling out!”
“run in!”