We had a plan for last night. Bladefist on HC then switch to normal and clear up to Ko’ragh. We did actually manage this. Not without some false starts along the way (naturally!)

Thursday is a day when there are a couple of late arrivals, but we manage due to having our Fake Tanks and Pretend Healers. We cleared trash on HC Bladefist while people were arriving. Shouting out bets on who would get killed on the way in by the 30 or so horde waiting outside (do they actually go in and raid???) Fenrir lost 15g on Jolly being killed as he arrived so only bet 10g on Gio being killed, which he lost as well!

While having a relax and run through of groups to allocate those to go up into the arena we had some ‘Yo Mama’ jokes posted. While quite amusing we also conceeded that to anyone who did not understand WoW in the slightest would think that we had 1- Not understood the concept of Yo Mama jokes and 2- Thought we had gone quite mad.
A couple of favorites are here:
Yo Mama so ugly even Illidan was not prepared
Yo Mama so ugly she is the reason the Titans left
Yo Mama so fat, chain lightning hits her three times
Yo Mama so fat it takes two warlock portals to summon her
Yo Mama so fat a rogue shadowstepped her in Ogrimmar and ended up in Undercity
Yo Mama so fat when she logged into WoW she automatically got ‘World Explorer’
Yo Mama so fat, she tripped and caused the Sundering

We got back to raining after announcing ‘Everybody ready!?’ quite loudly in ts to be heard over the giggles.
Marvv was on pulling duty and ended up putting up a pull timer almost instantly regardless if people were ready or not. It did not go so well. We wiped of course and then settled down to getting organised for an actual pull.

Cereals, a Priest healer for RT1 had mentioned on our forum that if you strip off so that the stat you want is the top stat when you eat feasts, you can avoid needing to make individual food, I had previously configured my equiptment sets to have a set named ‘Food’ and a set named ‘Ready’. ‘Food’ consisted of my belt and my bow. I was busy eating when the ready check came up, I clicked ‘Not Ready’ due to the confusion we had last time on Butcher where I said I was ready but I was just about to eat to get my food buff and a pull timer went out instantly.
So this time, I did the right thing. Not ready. A pull timer went out regardless!

“Guys I said I’m NOT READY!”
“Marvv…”
So with Marvv becoming the ‘Ninja Puller’ while being a tank I had no option but to roll with it.

Raidwiper did all the hard work as I was running around in just a belt and my sexy brown undies. I yelled out that there was no way in hell I could go up so they would have to put someone else in my place. I ran around positioning myself behind the flame pillars to make sure I did not die to those. The healers were having a hard time keeping me up, and it seemed to be at the expense of others!
One can only assume they felt sorry for my awkward situation. After all, it’s not everyday you raid with someone whose butt cheeks are hanging out (not on purpose!) 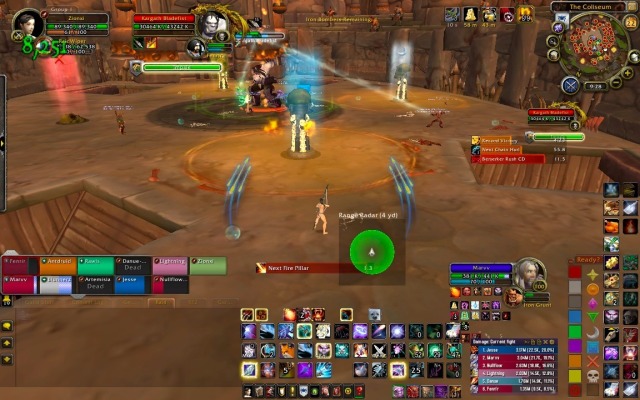 – Ant is the ‘smoker guy’ the one who asks for cigarette breaks quite often.
– Jolly is the ‘gold whore’. Wealthy and seems to be able to just keep the gold coming in.
– Gio is ‘Mr. Mic’ or ‘Robot’. You’re not quite sure what he just said as it sounded like he was slaughtering R2-D2 in the background.
– Xérath is ‘the quiet one’ mostly communicates in raid chat and then on the odd occasion that he speaks people get confused and scramble to ts to see who it was.