Well, two things for this week have infuriated and surprised me to the point I’m sure I forgot how to breathe.

Starting off with the second one… I had my mind blown last night. 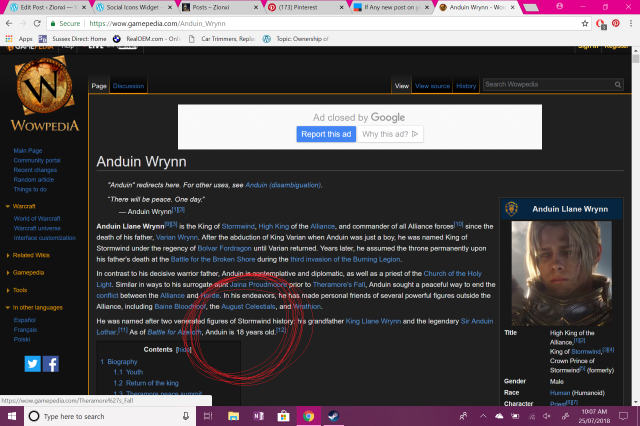 I was talking about him in connection with how the big ol’ tree the Night Elves live in is going to be burnt to the ground in the giant Horde cook-out. It was mainly about how he is trying to be a Warrior like his father but he’s also a Priest at heart. Does this actually make him more of a Pally than a priest though, because he’s wearing bloody plate and throwing a sword around… and I haven’t been the only one to question if he was upgrading his class.

But holy shit, the fact he is only 18 was a mind blower. That on top with people thinking who he needs to be set up with to ensure that he has an heir. There came out some snippets from books where Anduin was supposedly cooing over how beautiful some women were that he met, in the style of some Mills & Boon ‘Mummy porn’ romance but he would have been what, 14??? ERRRRR… Did some of these authors, like me, not realise how young he was when they wrote about him?
I mean, I think that I can get away with being a bit ignorant as I’m not being paid to write a book for Blizzard!

Someone even did the maths of how old he would be in each expansion.

I’ve seen the various models that have been used for Anduin throughout my time in WoW and has that boy had a serious glow-up! They’ve taken him from something that made me sure I’d seen Sims 4 plates with less angles, all the way to what we saw in the cinematic where he picked up his fathers fallen blade.

Then we were given this treat…

Holy shit. Ovaries all over Azeroth are going to be exploding.
The cinematic has reined in his age a little from his models appearance in game, where he looks in his 20’s rather than his teens still.
I loved in the trailer video how he threw that sword onto the ground in a very ‘fuck this shit’ way and then went full priest mode. I’d like to think that he just cast Holy Word: Salvation and turned into healy-boi because he just sorted out a lot more people than Brother Paxton has ever done!

But but but! This shows Anduin being an absolute bad-ass! He’s right up there on the front line rather than hanging around on the ramparts mostly away from danger (like some bint, naming no names) he tackles Saurfang before he even realises who hes just started on. That Shaman who picked on Genn could only block his blows until the frustration and possibly anger caused him to obliterate them with a smite. He’s not picking his fights carefully to ensure he always remains victorious hes going ham and gets back up if he is knocked down. For someone who is trying to be a Warrior like their Father when they are supposed to be a Priest and all this at the age of 18, his courage is far greater than others. Far greater than some are giving him credit for.
Even Genn shows his satisfaction when Anduin uses his true strength on the battlefield and calls to the Light. 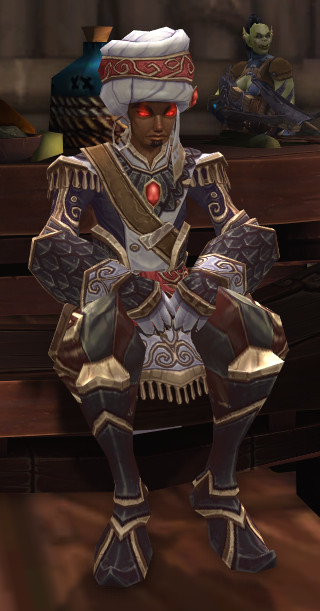 When it comes to Wrathion, I’m far more invested in the Black Prince than I probably should be.
I loved his attitude in Mists of Pandaria, the chaotic-neutral chat and his random hanging out in a shady pub. It made him mysterious and led you to second guess his intentions.

Back in MoP he told us a little of his back story.

“I have chosen the name ‘Wrathion’. To my knowledge, I am the last of the black dragons.
My father was Deathwing, the Worldbreaker, the Aspect of Death, the Destroyer… But I hope you will not hold that against me.
I have no love for my father, whose corruption destroyed my race, or for the red dragonflight, who stole away and experimented on my egg to create me.
Let’s just say, I am… unaffiliated. And I am always on the lookout for like-minded heroes.”

Spoken like a true Rogue but his hatered for the Black and Red Dragons may be the result of him not quite understanding what happened before he hatched. The Reds may have captured his mother but they also protected him from being eradicated, if it weren’t for them, he wouldn’t be here as the Black Dragonflight wanted him dead, not just captured.

His statement that his Father was Deathwing had confused people. His mother was Nyxondra, who was captured by Rheastrasza and forced to lay eggs in the hopes that they could purify one of them from the corruption that ran through the Black Dragonflight.

The Ultimate Visual Guide lists Wrathion as Deathwing’s son and as Onyxia’s and Nefarian’s half-sibling.
Nyxondra has been described as Onyxia and Nefarions sister by Kosak along with this statement:

Which would make Deathwing his father but also lead to the conclusion (and apparent validation) that incest was a thing within the Black Dragons.

Oddly enough, an official page stated that Wrathion is a child of Deathwing, and War Crimes mentions Wrathion being sired by Deathwing. The WoW Annual 2015 also lists Deathwing as Wrathion’s father.

This would lead to Deathwing is Wrathion’s Grandfather, not his father due to Deathwings Daughter is his mother. This would also make Onyxia and Nefarian his aunt and uncle, respectively. Which also corresponds with Wrathion’s own words when he called Onyxia his auntie.

Could it be though, that as Deathwing is the former Black Aspect that everyone just called him their ‘father’ as in the originator of the Black Dragons rather than in the literal sense.  Just like Senegos is the Father figure for the Blue Dragonflight but acknowledges that Stellagosa is his Granddaughter.

However, Wrathion was not technically sired by another black dragon, his egg was artificially created when Rheastrasza magically combined the purified matter of one of Nyxondra’s eggs with another wild black dragon egg of unknown parentage and a black whelp corpse. So if all three parts were of different parentage he has the potential to have the genes from six different Black Dragons.

This makes his entry in the Ultimate Visual Guide, Updated and Expanded  a confusing one. It removes all mentions of Wrathion being related to Deathwing and his children. It only lists Nyxondra as his only known relative, even though we are well aware that Deathwing genes are in there somewhere.

So we know that Deathwing isn’t his Daddy. We have had all other Black Dragons removed from the equation.
This does leave a rather puzzling interaction in the Chromie Scenario.

Once you fly down to the Obsidian Dragonshrine you see Wrathion there. And in a turn of events from what was said by him on the PTR he no longer talks about the Demons being there, he talks about the undead being there. He tells you that he is there to just have a look for his own amusement but he is dismayed to find the undead running rampant and tells us:

“Father would never have approved of this.”

Once we chat to him a bit more he tells us to ask whoever is controlling the undead with regards to Chromies assassination.
We know that Bolvar is supposed to be in charge of the Undead as we put him on the Lich King’s throne. And with the Scourge going ham at the Ruby Dragonshrine, is he also involved with the ones in the Obsidian one?

More importantly who is the Father that would be so disappointed?

When you’re in there you can see just Undead. However, when you visit the Obsidian Dragonshrine out of the scenario you find the Undead there and their creators. They are all listed as part of the Cult of the Damned.

Ok, so are these the ones that control these Undead? Not Bolvar?

If you go in the cave/skull you find another Black Dragon. Serinar.
He’s dealing with clearing them out of the shrine, and hes pretty pissed off about them.

If Serinar was trying to clear them out and we find out at lvl 112 that he failed, is he the Father that Wrathion feels would be disappointed to see them all still here?
Serinar is currently MIA. We don’t know where he is or where he went. Has Wrathion learned something about his parentage that we haven’t been told about yet?

Seeing as Wrathion was cut out of Legion at the last minute in favour of Ebonhorn, this was the only bit we have really seen of him. It does mean that he should make an appearance at some point in BfA though as we see him at 112. A full two levels into the expansion. Maybe we can find out some more of where he has been and what he has been up to?