This post is up in the communities tab. Advertising themselves as a community that is predominantly by women, for women. They provide a space that is free from the usual issues that women can be faced with in game. Namely the shit talking and harassment.

They have faced many calls and reports of sexism for being a community that is for women.
I haven’t been in a situation that my gender has been used a a weapon against me to make someone else feel better about themselves in game. I also don’t really play any other multiplayer other than WoW as they don’t really grab my attention. So in that respect I have been protected from most of the hate and therefore while I don’t have the need for this I do understand that others do.

So, for those at the back who insist that there is nothing wrong and therefore this community is just sexist I’m going to go into a little bit of detail as to why women felt that they needed somewhere that they wouldn’t face the normal attitudes that seemingly go hand in hand with being female and playing video games.

Now, as I said, I don’t really have that much experience of harassment in game due to being female and for that I am lucky.
I have had a creeper once and they were swiftly blocked and members of my guild presented a united front against them on my behalf. The guilds I have been in have been friendly enough and the people in them have not batted an eyelid about my gender.
I have encountered one player who decided that because I (and any other vagina owner) were women, then we were ‘too emotional’ to be logical. Which was interesting considering another male player who was just as passionate about people being fuckups in raids (no matter if they were male or female) was not ‘too emotional’ just because they were in possession of a penis… That guild was eventually swiftly left.

But! the horror stories of women being verbally attacked, shit talked and harassed by men just because they heard their voice or realised that they were female are everywhere online. These aren’t just your normal ‘you suck at this game’, ‘your DPS is shit’, ‘git gud scrub’ shit talk, this is stuff that is directed specifically at the players gender to belittle them and make them feel uncomfortable while trying to make the writer of the comments/messages feel superior.
Stories on YouTube showing the text sent to them, often in whispers, until they have to keep making new lvl 1’s to continue the harassment.
Twitch streamers where the people who have taken time out to watch these female gamers then spend their time being derogatory to them and using the gamers gender to verify why they feel they are ‘shit’ at the game or should ‘quit’. All things that if the gamer was male, they wouldn’t say, they would just accept that persons play style or just move on to another channel. 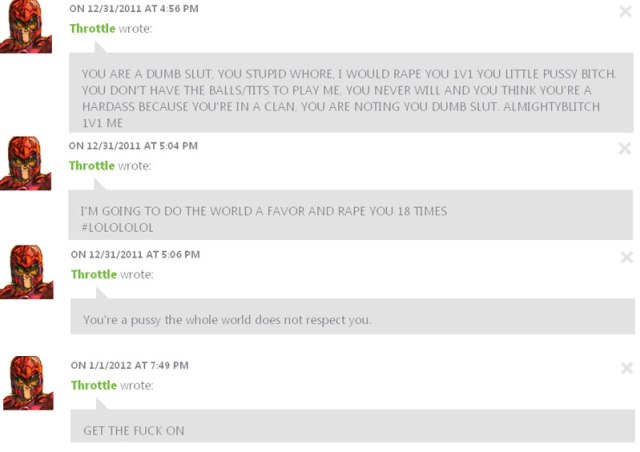 It’s this sort of thing that leads women to want spaces where they are able to escape from this kind of behaviour and play the games they want without feeling that they are going to get asked to suck someones dick just because they are female and playing a game.
Or being told that their Boyfriend must have got all their achievements because it shouldn’t be possible due to they have a vagina and not a penis.
Or being told that they are going to get raped because they beat someone in PvP.
Or if they don’t agree to suck some random strangers dick then they are told they are an ugly bitch/whore/whatever or should kill themselves.

Things like this are swept away. Primarily because it seems to have become the norm as seen in the ‘hate mail’ sent into the above website, except that ‘yo momma’ jokes aren’t really the same as rape threats, are they?

If you don’t like it then you need to ‘man up’, stop being such a ‘pussy’. If you can’t take it you shouldn’t be playing video games. Full stop. Not that they should stop saying their going to rape you because you just killed them in a grudge match.
Or the premise is that women who play video games and end up with messages like this have done something to deserve it, apparently because they are bad at the game or just ‘bitches’. I’m not sure what could have possibly been done that would have required the message that raping you 18 times would be doing the world a favour??? But for some, the rather than the end messages being the issue, it is easier to blame the women playing the game and that their actions must have meant that they deserved the messages that they got. 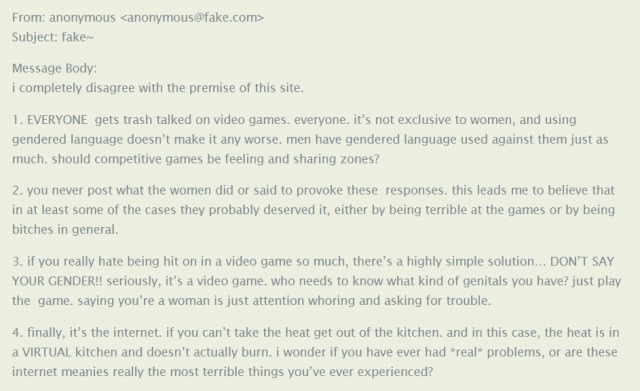 The idea that I should silence myself to prevent getting messages like the one I’m going to post below is incomprehensible. It is better I don’t use voice comms or say anything that might give away that I’m female than not using my gender to belittle and harass me.

It would apparently be better that I didn’t let slip that I spent £50 on some stereotypical feminine item in text based chat as that might give away that I own a vagina, than you not threatening to rape me if you don’t get your own way.

And if I do let slip that I’m female, I’m asking for trouble and an attention whore.

I mean, I could be telling you that I’m female because that’s why I have no input into the talk that everyone is having about your balls sticking to your legs during the summer. That is not an open invitation for you to harass me.

But then we are also told that if you don’t like it, get out. So if you dare to tell someone or let slip that you are female, accept the harassment that comes with it or leave, stop playing video games.
We are told to ‘Be anonymous online or face the consequences’. This is why women decided that they needed somewhere that they could be an actual person online without needing to fear for the time it is going to be used against them.

I guess it hadn’t even crossed peoples minds that maybe the constant sexist jokes of ‘get back in the kitchen’ are tiresome to listen to and a space where they are not an old record on repeat would be a good thing.
Or being told that girls shouldn’t be playing video games, or you’re shit because you’re a girl. It gets boring real quick. Even when there was a twitter thread saying that eSports needs more women there was one who was quick to state that women are essentially rubbish compared to men so why bother? Completely sidelining the resarch placed above and the emphasis put on the fact that women just dont get the same oppertunities given to men in eSports, they have to work harder to be accepted when they do manage to get a foot in the door and they are then subjected to harsher criticism than males would be if they both made the same mistake.

When faced with this in every area of the internet, why on earth wouldn’t you want to create an area for yourselves where you don’t get this kind of put downs. It’s not sexist to say your’e shit, it’s just the truth. Doesn’t matter that you don’t get the same chances to be better because of sexism, you’re. just. shit. compared. to. men.

I haven’t heard the voice of some guy in a PuG and then messaged them to suck my clit.

Nor would I think any of those things are appropriate, so in that respect I have ‘manned up’ I have restrained myself from being a disgusting human being because something didn’t go my way or because I failed to grasp what self-restraint is. Alas, this hasn’t filtered down to everyone and this idea that being online means that you can say these things regardless has emboldened those who think it’s cool to tell a female that you want to use sexual violence on her because something happened that you didn’t like.

As for the people who are bitching that a space for women is sexist. They had been told that they could join as long as they aren’t idiots. The space is female dominated and looking primarily for women. To enable them to quickly sort out the potential members from the trolls they have asked that you say hello on discord before being allowed in. They accept transwomen and their own transgender members aid those looking to join. Again, they need to do it to ensure that they don’t end up allowing someone in who is just looking to troll or spread the harassment they are trying to avoid.
They want to be able to talk about periods without being told their being gross and they shouldn’t be talking about that in a public chat.
It was also pointed out that there are many groups that cater for only one type, be it nationality, fan of something, or class/race in game. None of these have stirred up as much hatred towards them as the idea that women maybe want somewhere to hang out in game that is threat free… The only other place that has is the LBGTQ+ community.

And they wonder why anyone who doesn’t or can’t conform to this wants a space of their own?