It has been (almost) one whole week since Classic launched and the 12 hour days have resulted in getting to level 28.

When it takes five minutes to kill 4 equal level mobs you know that the grind is going to be long but that’s half the fun.

But, lets recap on what happened while getting to level 28…. 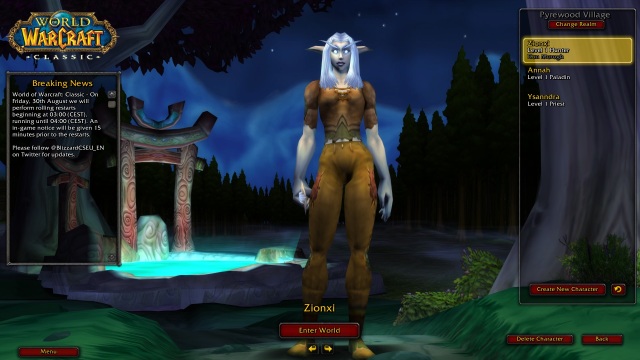 This was the character I made. Zionxi the III was residing on Pyrewood since name reservation opened. She was ready and waiting and so was I.

Come the launch, I was sat in the loading screen when some bright spark piped up over on discord that maybe we should make our chars on the new server that was released, just in case we couldn’t get on this one due to horrendous queues…
So we quickly went over to Nethergarde Keep, I hastily made two of my chars again and then relogged back to Pyrewood so we were ready to log in as soon at that enter world button turned red.

Or so I thought…

I managed to log in and oh shit! there were so many Nelfs there. As I was heading out to get to Dun Morogh I just ran off towards the road leading to Darnassus not even bothering to pick up any quests.

I got to the dock at the bottom of the tree and hopped onto the boat when it got there.
My run was going to take about 30 minutes so every second counted. Which obviously meant that while travelling over the ocean to Auberdine, I would get disconnected. Which is exactly the same thing that happened in the stress test when I tried out the whole run to time it…

While being able to click the enter world button and get straight into a loading screen, I got the Loading screen boss and ended up sitting there looking at a 90% full bar before the connection was lost and the “World Server is down” messsage appeared.
This loading screen/world server down thing happened twice more before I got back in.
But oh fuck. The boat was going back the other way…
At this point, I could see on the mini-map that I wasn’t too far away from the safe water zone if I made a decision now.
I told the others that I was in but the boat was going the wrong way and should I jump…
There was a mixed response which was not helpful. Some said I would die others said to do it.

So I jumped.
Launching myself off the side of the boat with a beautiful front flip. I started the swim back to the dock to get the boat to Menethil Harbor. Getting on the boat (with a couple of other Nelfs), I was on my way to the half way point of my run.

It was then that there was calls over discord about not being able to find other peoples Chars to group up with. We had to ensure that we confirmed the spellings of chars names as there was a struggle to find Weewooweewoo at one point.
Then it came to adding me.

“Not spelling it any differently?”

“Ella. Are you on the other realm?”

“I’m on our first realm? The one we decided on… are you on the other one?”

“We said over disc?”

“When!? Because I told you that I was going afk and none of you said anything when I got back…”

It was a bit of a panic. I was on a realm with a hench queue and halfway home, while the others had all gone to the other server.

As their runs were shorter, they decided to relog and get in on Pyrewood.
Except they couldn’t.

The queue was huge.

Then it was showing as “offline”

I managed to get to Dun Morogh and start to drown when it was decided that after 30 minutes of loading screen that were not going anywhere. I needed to relog back to the new server.
Fine.

So I did it all over again and finally, the leveling could begin!

So as I was on the final boat I needed over to Menethil Harbor I wasn’t too happy with my hastily made char.

“I think I’m the wrong colour…”

“NO! A- thats racist you knife eared cunt and B- you are not restarting this shit!”

Killing bears for meat they didn’t have on them was another mind corrupting task.

To be followed up with…

“we can kill some mobs?”

*Druid enters my screen at the left, runs straight past us all down the path and exits on the right of my screen*

*points at the bear on the bit of grass the other side of the path, right in front of us*

While on the fucking Thelsamar Blood Sausages quest…

“How many bear meat does everyone have?”

*We kill some more things, my pet dies. I res it, its unhappy. Feed it some meat…*

These are ALL DWARVES!

Why don’t they have union cards?!?

Margaret Thatcher destroying the unions in World of Warcraft!” 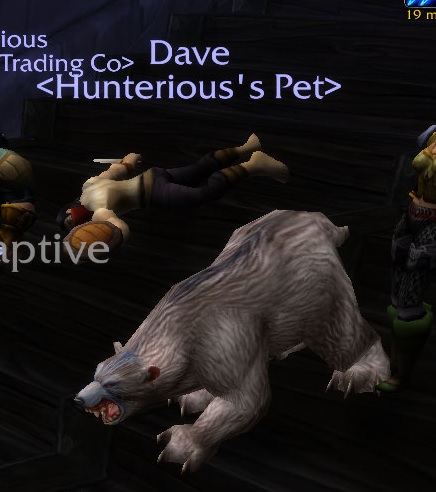 Seeing that special someone in game

This I might need to explain.
As we were in Loch Modan, Westfall, Redridge etc doing our quests ke kept seeing this hunter pet, a bear named Dave.

As we only really saw the pet and not the Hunter it was connected to, we just announced that Dave was here.

At first it was a bit of a disappointment that they were where we were as it was added competition for us but then it turned into joy that we had run across someone we recognised. And for us, we just couldn’t forget Dave the bear!