I’ve trawled through the gripefest to discover whats been pissing people off this week and boy, do we have some good-uns.

The Blizzcon goodies have been announced and not only do the WoW players have adorable little Murloc versions of Anduin and Sylvanas, there is the Windigo Onesie transmog set. 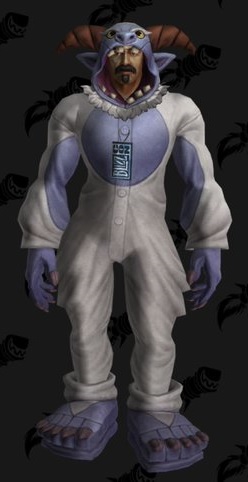 Complete with massive slippers and a Blizzcon lanyard you can finally relax safe in the knowledge that all of the Windigos that have been killed for scraps of their fur have finally been put to use.

However, the topic at hand is now stating that if people are to be running around in these onesies, then it is going to break immersion. And if that is the case, release the restrictions on transmog that are supposedly there to preserve immersion.

And this point is very true.

The RaF explorer set was dragged in as an example of more immersion breaking stuff in game that can be transmogged. But as someone pointed out, there are people all over Uldum wearing that shit. What about people like Brann? Hes literally racing into shitfests at 100 miles an hour wearing nothing more than a cotton shirt and some chinos, yet he’s survived more encounters with god-knows-what than our players have ever had.

Someone wasn’t buying it though and felt that for a char that usually runs around in plate and headbutts mobs to get their attention, wearing your casual clothes let alone some pajamas is just going to ruin things.
They were swiftly reminded that when you start out, you are not wearing much better than a loincloth and some big shoulder pads, especially if you consider what Orcs have to start with…

There is also the ability to hide almost every single piece of armour you wear. You have been able to hide your helm and cloak since the dawn of time. Does running around without a helmet break immersion? Does running around in nothing more than your woollies? 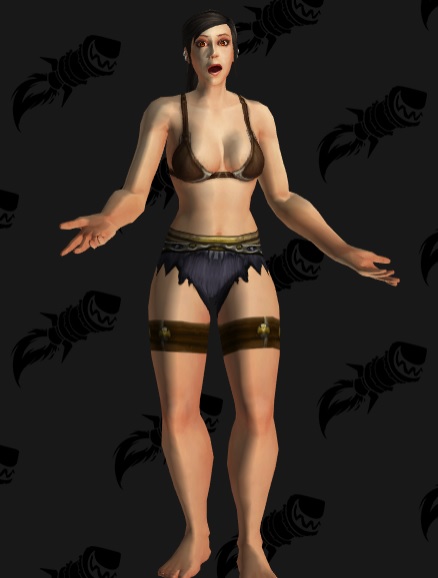 Brave, I think is what you would be termed. And possibly a little cold depending on what area you were residing in.
After all, if you’re a caster, it is less about the clothes that you wear, it is more about what you can do with the ‘magic’ running through your veins.
Maybe Tanks might have a hard time reconciling facing off with some boss mob while almost butt naked but maybe not. Going in ‘gladiator’ style would be their thing?

Going back to the main point that the OP was trying to make, if we were told that we were supposed to stay in the immersion bubble, but then we get given things that break it, why can’t we just fully step out of the damn bubble.
*COUGH* ARTIFACT WEAPON SKINS *COUGH*

I dunno, I’m not sure that Blizz are doing it deliberately but I do feel that their obsession for class fantasy is kinda being used to double down on the transmog restrictions.
But if anyone has played a Holy Pally in Classic can tell you that you spend more time running around in cloth than plate. And that is not class fantasy breaking, that is you making use of the best of what is available. Fuck Mages and Priests. Fite me irl if you want those +gazillion int shoulders.

Just relax the fucking rules already. We have seen enough class fantasy class breaking done by our leaders (who we are supposed to look up to) and we are not the simple adventures anymore (Blizz’s words!)  who are having to settle with the uniform that they are given.
Plus my priest is fed up with having to wear a fucking dress while running around on the battlefield…

Oh shit, this one was spicy.

So OP felt it was time for Blizz to just let every race play every class. Simple opinion said in a not so simple way that managed to stir some tension.

The straw that broke the camels back is apparently Tauren Paladins. Way back in Cata.
They have been sat on this sizzling opinion for 9 years and have had enough.

Our favourite hunter from last week, the one gets stuck in combat with every mob in the Crimson Forest, said that they actually agreed, now is the time to do it as the restrictions make no sense but to them, it would be a nightmare lore wise.

Many people had many strong opinions on that.

Some said the lore would adapt, be pointless, prevent it, allow it etc…

Some others were totally here for the idea of Gnome Druids, Feral being a kitten was one of the many suggestions.
Some were happy for every class to be played by every race but make that class have the flavour of the race, like the Kul Tiran Shamans and Druids.

Others were just flat out no. The lore said it cant happen so therefore the lore will mean that it will never happen.

But the lore is changing.

Specifically via retcons and a lot of them…

We have had Pandaren teaching the world about the ways of the Monk.
We have had the Orcs and Draenei, teaching each other about their classes.
We have had races that were once ‘unable’ to do something, now being able to learn…
If the lore has told us that it is possible for people to teach and people to learn, why the fuck is it lorewise impossible?

This was given as the examples of what combos have no place in WoW. But looking at the list, there are probably a million ways that you could get them in.

Undead Paladins: some of the forsaken were probably Paladins when the shit hit the pan. Using holy power is supposed to cost great pain to the Undead wielder but we have Alonsus Faol. The organiser of the actual Paladins… Wielding enough holy power that, with the help of Anduin and a Windchime, they managed to raise Calia as a Lightforged Undead.
If a forsaken can wield that much Holy light and also perform the task of Warrior, there is no real reason why they can’t go back to their roots in some cases and learn to be a Paladin again.

Tauren Rogue: If the huge Kul Tirans and Worgens can be rogues… then it isn’t about their size. Cloven hoofs don’t go clipity-clop, so it can’t be their sound. They have spent enough time around the also huge Orcs, to be able to learn how to utilise poisons and are knowledgeable about stealth through their Druid members.

Gnome Demon Hunter: I’m just going to leave you with this…

Pretty much however, the post was split into two camps, those who thought the lore could evolve and continue to tell the story of the races and how they have developed (like they have done so far) and those who felt that the lore that is now should be the way it is forever.

What I’m not sure about in the argument for “lore is permanent” is how they then reconcile the addition of race class combos that have been added since Vanilla? Surely that did the same thing and introduced classes to races that hadn’t been seen before?
When Vanilla started there was a set combo, with each race set out with the lore as to why they had those classes.

At this point, just let people be who they want to be on those chars. We are being sold the story that we are starting anew again but this time it is different as it is we who have changed. What is in the past is now firmly in the past. Blizz have said so.
Let’s just have everyone teach everyone else all there is to know and then get on out there…

The title was enough to cause me to crack out the popcorn with anticipation over what bitchfest was waiting for me once I clicked on the link.

This one was actually funny…

It took people a while to get over the “sausage arms” part before they went on to either agree or tear the OP a new arsehole.

There was a very vocal few who couldn’t get their heads around how Sylvanas was physically able to hold off the attacks by Saurfang. She doesn’t have the muscle mass (apparently) which meant that the fight scene lacked realism and therefore was bad and Blizzard should feel bad.

I’m not sure what type of fight scene they were looking for then? One where Sylvanas gets cleaved in two?

Some were comparing her new found strength with when she got murdered by Lord Godfrey via a bullet between the eyes. How if she’s as powerful as she is in the cinematic now, she shouldn’t have died so easily back then.
Especially as she is a Banshee.

There was also grievances with how she was a Hunter, doing Rogue things, before finally behaving like a Warlock.
This shouldn’t have happened either. She is a Hunter and that’s that.
This was put to be by reminding people that the leaders in game have never stuck to one class. Anduin, the plate wearing, sword wielding Priest is testament to this. So why should Sylvanas also not conform to bending the class rules?

While the lore and the cinematic were being thrown around. There was this from a commentator… 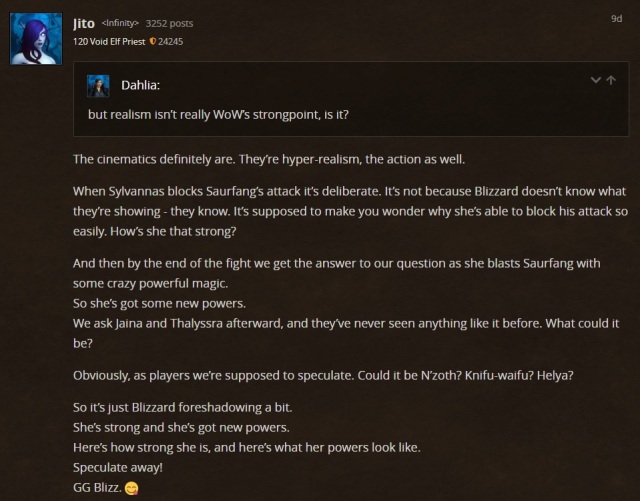 While people were still harping on about the knife fight not being irl realistic, it was pretty clear that we were supposed to see that she was biding her time, even playing with Saurfang.

She was waiting to see what he was harping on about, watching him use every ounce of his strength to no avail.
While Saurfang may have known that Sylvanas had been empowered, he didn’t strike in any way that was going to fuck her up as he had a weapon that she cant defeat.
Words.
He knew that her ego is her biggest weakness and used that to force her hand.
He got her to show off what she had been hiding. Her biggest surprise is now out in the open.

You know who else uses black/purple smoke?

If Jaina hasn’t seen anything like it, you know it isn’t arcane.
So that leaves void…

If she was infused with Void after cutting a deal with Azshara and one would imagine, N’Zoth as well. It would make sense for her to be super powerful in all respects as she is a Banshee and she has an Old God helping her.

The cinematic wasn’t about using irl circumstances to recreate a knife fight and in all fairness, considering what our characters can do that are beyond the realms of reality, it never should be.

It was to show you that she has turned into the big bad.
That is the reality it was going for.