A friend of mine asked me where I got my gear from. By my gear, she meant what she could see on me not my actual gear. This lead onto a whole conversation about transmogging and where to find the information for it. After showing her to Mog My gear and also the Icy Veins mob lists she decided that she wanted a slutmog too. So my friend went off and had a look at what she liked the look of and what she wanted to get when she came back to me with this. 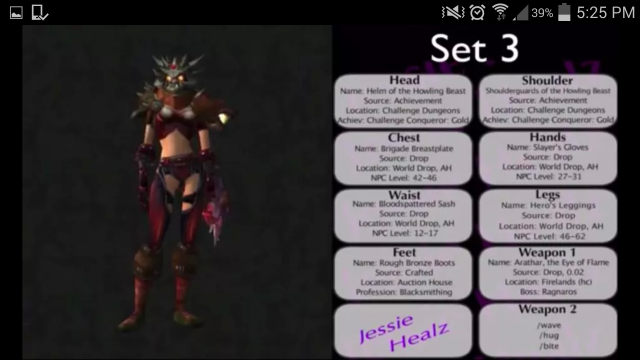 While she was enthusiastic about it there were some tweaks to be made. She didn’t like the shoulders and bow and didn’t want the helm. So after some hunting we found most of it.

Some of the changes were the shoulders, boots and gloves for just ease and to keep it looking along the same lines. Many an hour were spent in Stratholme killing ghouls to get the breastplate.

Ive had the Brigade legs drop and I’ve had the shoulders and gloves. The breastplate was eluding me. Looking on Wowhead it listed the best chance as rares. Now I’ve circled Tanaris and Felwood for a good hour and found only two rares up. I decided to look at the figures again.

Studying it I saw that after all the rares theres one place that popped up next on the list. Stratholme. The drop rate was dismal but after looking at the table there were a lot of mobs on the list that dropped it. Even better was that the drop rate was significantly higher from Steel Lockboxes, and theses also dropped from mobs in Stratholme. Due to the reset ability, I could clear constantly. The amount of time it took rares to reset, I would have more luck spending an hour clearing Stratholme than I would farming rares even with the 0.08 drop rate!

A couple of runs through and it was there! I’d collected a few lockboxes as well but now the contents of those were just a bonus. I posted it over to her and the next time I logged in here it was. Not entirely the finished article but almost! Looking at what else needed to be found, the belt could be improved and obviously the bow!

The shoulder were obtained in a quest line that she did but the same colour and model are also found as a drop from The Culling of Stratholme. The legs, boots and gloves are all from the Hero’s Set.

We’re now on the hunt for an epic bow to go with it all. We were looking at Heartstriker from Blackwing Lair. Not an easy thing to obtain as you (as far as I’m aware) can’t get past the first boss on your own. Having a black and red theme does have its downsides!
There’s not a whole lot of choice!