With the opportunity to run dungeons to get bonus rep for certain factions of your choosing and as a quick route to farm valor, they are now the playground of the end gamer.

One particularly obnoxious player, Avarilyn. A Pally from Argent Dawn sees the heroic dungeons as a quick ‘pew-pew’ and doesn’t seem to care that some of the people running them may have only just dinged 90.

The other dps were running around in lfr gear (obviously apart from the pally) with the occasional heroic item. So their gear wasn’t great which also meant that compared to our heroic clad elitist they were not going to do much dps. Still, this is the constant spamming we got during the run: 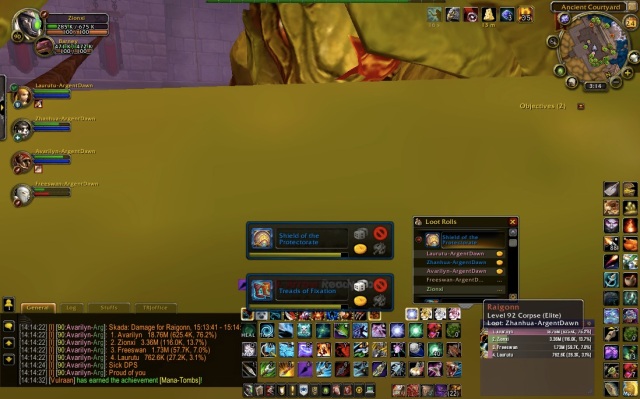 I gave up near the end. Didn’t see much point. He had totally taken the fun out of the run and when he left, we (interesting note that the healer had a good old bitch as well and it turns out they knew the Pally) had a good old moan about his constant spamming. Which is fair enough considering he did it constantly to us for the entire run.

So to go on, this got me thinking about pug groups in general…

When you go into a dungeon that is there for people to gear up why treat it like your personal playground. Bearing in mind that four of us were there for valor, it is not where we belong. There was a thread on the WoW forums from someone who had encountered an elitist like this while leveling and had been kicked for ‘low dps’. Why would anyone do that? It’s something to expect in lfr and more so in the current content ones but complaining about people in a dungeon who are there for the main reason the instance is there… beyond belief.

There were comments on the thread for Blizzard to introduce options so you can pick if you want a quick ‘faceroll’ run and be put with similar people. As much as I don’t like standing around after five wipes (it has happened) I don’t feel the need to ditch the group and hope for a more adequate team in the next pug. Personally, it feels like a triumph when you do complete it after a struggle. Also people are less inclined to think you (and possibly your entire guild) are a knob!

I’ve been blessed as you can see below with the Pally doing a bit of self googling and coming across this! (maybe I should armory link all the people I mention?)

Unfortunately, they weren’t too happy with me using them as a yard stick of how not to behave in a dungeon and for it to lead on to the comments made in the WoW EU forums about pug groups in dungeons and how end-gamers who hide behind keyboards treat dungeons as something they own and indeed feel that if they are hiding behind a keyboard they can behave however they want to whoever they want because they are ‘invisible’. It’s been described by psychiatrists as ‘playground regression’ where essentially you’re an ass to everyone because you don’t get your own way.
It’s also interesting to see the responses that type of person will give when they are hidden away and feel that they are some sort of untouchable God who can do and say what they want (My Facebook link is at the top of the screen, go nuts with that btw, I’m not hiding) It’s this type of person who the forum posts about being able to opt in for faceroll runs are about. The ones you see in lfr every day… Unless you’re very lucky like me and get tanks who go through the tactics before every boss to help out the people who may have not been in there before. Although when I stated my amazement and enjoyment of the lfr this happened in, I was accused of ‘breaking the game’ as that never happens apparently.

I must find the screen shots and name that Druid Tank in the hopes they see it as they were amazing!

Anyway, I digress…
It has come to light that the healer wasn’t actually destined to heal this as it was a zerg. So  unfortunate days for anyone who may have joined who actually wanted to experience this dungeon. Now I had no clue what was going on with this ‘premade’ nothing was said at any point (I’ve been through the entire conversation log as it was too juicy/bitchy to not keep it all for later) that it was a zerg through. Stark contrast to another dungeon where the tank and four friends were in there and treated me like ‘one of their own’, asking if I was farming anything for a mog, wanted to do achievements etc… I’ve been in dungeons with people who have only ever tanked or healed and are using it as practice for dps for example, and they have told everyone that they are new to the role and everything has been fine and dandy as people know what to expect.

I’m a patient person and believe that kindness goes a long way. So does clear communication about what to expect anywhere. I’ve been that person who is the ‘end-gamer boosting a friend’ compared to the others and no matter what the ilvl of the person was, I made sure they were happy with it being a quick run through or if they wanted absolutely everything killed. The healer of that group was a fresh 90 too, running with a friend and when they were not doing, what appeared to be, much healing the obligatory WoW comment of ‘yo, you healing?’ was asked from the fifth randomer. This time however, brains were engaged first and a sensible reply came forth of ‘Sorry! We can slow down?’ from me. I even started bandaging people when the healer went OOM trying to keep up. It was a zerg, people were informed, everyone was happy. Hell, people even asked if we were running another one as it was “such a good group”. We did, just because they asked and because it’s a shitstorm in a teacup if you get a bad group. So when you get a question like that if you say no it’s like killing a puppy…

To cut a rather long post short, from a ‘random spectators’ point of view, and to get back on track about what this post was actually about before it was hijacked by someone complaining that they got called out for their attitude. I’m not going to ‘defend’ this post anymore. The comments speak volumes about that same attitude that was chucked about in that dungeon.
It is that kind of attitude, the elitists who think they are the be-all-and-end-all, that ruin things. Regardless whether it’s in lfr or a dungeon pug, whining about people, kicking people, spamming shit is not what people need to see. The idea about having a ‘faceroll’ option for those who do want to encounter this type of crap is a good one. I myself would be quite happy with a normal pug where you meet people who are running it for the enjoyment of it, not to suck the life out of it.

12 thoughts on “Farming dungeons for valor”