Tuesday was a strange one. I was late, Tsff was away on business, Jolly got caught at work and Tauti had to go into work.
Three people down and we needed something to do.

Naturally, the first thing that sprang to mind was an Elegon run. With Marv and Rawls joining us we headed over to try and get us a piece of see through serpent.

We were a bit over excited and started clearing with just one healer. No one realised until I saw that Ant’s name wasn’t the usual bright orange it normally is. Rolling over the other name that was a dull colour I noticed that Flinkan wasn’t with us either.
“Hang on, we only have one healer!” I spluttered as Marv ran down the stairs to the first boss. As I was running back after going off to investigate a hallway. Luckily, there was enough trash to keep us occupied until Flinkan got to us and I stopped wandering off like a small child.

Ant however was no where in sight and the bosses got pulled. I let an ‘errr’ go out over ts as I fixated on Ant’s name and the fact he was still at the shrine. Like a rabbit in the headlights, I watched everyone batter the lion-dogs while I tried to work out what to do about Ant.
“Oh shit! He’s not here?” Marv asked as he occupied all three bosses. “Sorry Ant! We’ve started without you!”
“You didn’t need anything did you?” Blunnerz asked.

There were several jokes about how we might struggle to get this boss down or that we might all die due to the damage. One of the jokes had hardly been finished when the bosses died.

We pressed on and got to the second boss, assuming that Ant was on his way. We got in the ring and everyone was there. Onwards!
This one seemed over before it had begun! The boss gave us all a tickle and then fell over. Without hesitating we ran on.

The next few bosses were no trouble and were down before we could make many wise-crack remarks about wiping.
When we got to the trash before Elegon, Marv pulled the first group and we just seemed to lose our senses and just attacked anything that moved. There were several calls for “I’m tanking” as Marv had to herd all the trash up again.
“Are you shooting the big ones?” He asked as he chased one of them around.
“Yeah” someone said, carrying on attacking.
“Oh! I was going for the little ones and I was wondering why they were all running away!”

Someone died. It wouldn’t be a proper RT3 run if someone didn’t die on trash. Getting them up after the last trash went down we stood near the console looking into the abyss.

“If you jump to the middle you get a mount!”
“Oh if only Jolly was here with his heroic leap”
“Are we going to switch this thing on?”

We did switch it on and set to work. Protector thingys were killed, balls were nuked, the floor was evacuated by everyone… Well. Almost everyone.
Flinkan suddenly had a fit over his keyboard and ‘jfsfjkofvj r syjgerghfdgj’ was typed out. As we were stood on the outer edge of the ring, killing the columns we saw Flinkans nice shiny blue bar suddednly turn black and the word ‘dead’ was emblazoned across it. Oh dear.

Alas, there was no mount so we carried on and killed the last boss. I’ve always wanted to click the machine so I did, causing everyone to scramble down to the lower room. Marv then realised he was the only tank. With a high pitched “errrr! Ok!” coming from him the mobs started coming. Killing them quickly enough for there to be a substantial pause in between the waves, we had time to stand there and twiddle our thumbs for most of it.

We then went into HoF. There we managed to ninja pull the first boss and despite not everyone being prepared we got it down fairly quickly. However, no matter how hard I tried, I just couldn’t get through the spiraly shit on the floor and right before the boss died my char seemed to give up the will to live (or the healers forgot about me again) and I crumpled up into a neat little pile on the floor.

When we got to the Wind-Lord, everyone sighed.
“I have never made it to the other end on this character” I said. The only time I’ve done it is on Lilouann, I really wished I was on her now!

The first phase was fine, got through that really easily. The second… Well. I was running to the other end of the hall when I got a heroic leap away from the boss when two whirlwinds appeared in front of me. I was doomed.
“Oh for fucks sake! I was nearly there!” I groused over ts. Nanutza was having similar issues. Although she managed to die.
“I’ll just wait for the boss to come to my corpse” she laughed.
While I was messing around in the middle the rest of the team were doing a good job of killing the boss and when I was almost at them again he died.
“Hurray”
Not the most excited of responses to a boss kill but I was just glad it was dead.
Next on the agenda was Garalon. 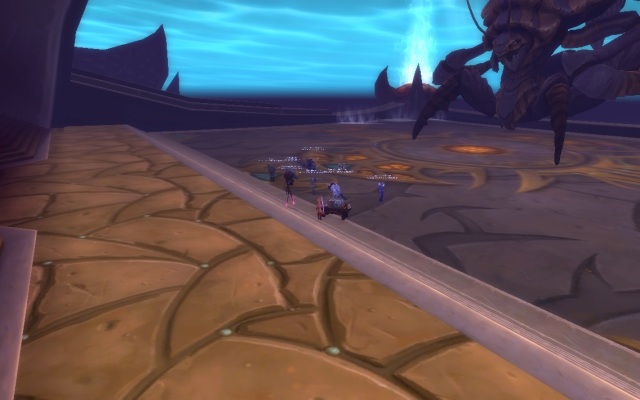 After killing the trash, the big bug bastard appeared.
“Aw! Now I can’t get my loot!” I complained.
We did a little tactic discussion and managed to ninja pull it.
“Omg run away!”
There was a massive scramble to the stairs but three of us were stuck in side. Feigning death I waited for Snuggles to die before I got killed by dots. I didn’t make it. Stupid flappy bat-fish killed me again…
Up we got and tried again. With Marv dragging it around, we got half way and then wiped time after time. We regrouped and discussed what we needed to do and what was killing us.
While we were chatting, Blunnerz chucked down a healing aoe and pulled. Again we scrambled for the stairs as Garalon started to lumber down them.
“What the hell! That’s not fair that he can get over the wall!”
There were pheremones everywhere as people were running around the small room waiting for him to reset. You would have thought we would have learnt not to ninja pull the boss. Oh no… We did it another three times.
“God damn it”
“Run!”
“I forgot! The healing spell pulls the boss!”

Marv suddenly piped up with a suggestion.
“If I was on my other char then we could kill this no problem”
“We could summon you?” Nanutza said as Treehouse created a summoning portal.
“Oh yeah! I’m not locked in this one! Haha be right back!”
Once in, it took us all off two seconds to kill the stupid bug…

We didn’t have as much luck with the Blade Lord.
Although I did learn something that with all the times I’ve run this, I did not realise I could do this until Rawls said about it.
We had too many people in amber to break out than we had people without the debuff. Rawls suddenly mentioned as we were looking at a raid completely encased in amber.
“This is where you want movement trinkets” he mused.
“Omg my racial!” I yelled.
And then as a beautiful harmony we both said at the same time…
“Every man for himself!”