I’d been so content having Walter that I didn’t really give the actual repairbots any thought.

When I bit the bullet and dropped herbalism for engineering I went around and collected plans but never really did anything with them.

Yesterday I finally handed in one of the last parts of the legendary questline after wandering around with Blackhands severed arm for about a week. I went off to find Kadgar and Garona hanging around outside the Horde camp. Kadgar was as casual as usual, standing there, not caring if he was spotted. Garona was hunkered down, waiting to go on a killing spree.
Picking up this quest I already knew it was going to be a headfuck. No real skill from you. All you had to be concerned about was if your computer could handle enough graphics to clearly show what way the mobs were facing. I’ll give you one guess about the state of graphics on mine…

Heading up with Garona, I could get to the pit with the Horde having some kind of rally but my computer decided that if a mob walked away too far from my char then it would fade into the distance so I never knew when it was walking back. Coupled with the other mobs that were roaming around the was a tiny split second to send Garona in and hope for the best.
Needless to say, it didn’t go well.

After repeating this over and over and at one point watching a guide for so long that the mobs reappeared behind me. I cheated. I joined a random group and got into the first tower that way.
I then joined a second group to get up to where I was supposed to hide behind some barrels.
I got up there and had no idea where I was supposed to be hiding. So, I left the group and let them all come at me. Garona and I were dutifully ‘rescued’.
I went off again, this time trying to sneak around the back, Garona followed me around, enjoying looking at the Horde architecture. Knowing really that there wasn’t going to be a back door I crept back round to the front. There were no mobs.
I inched up to where I needed to go. Half expecting my computer to suddenly kick into gear and all the mobs appear instantly. I nestled myself into a corner and waited. Still no mobs.
I reloaded.
They all appeared.
Garona had vanished.
I could see the little shit down by Kadgar as I poked my head over a wall.

So all that was left was to pick them off one by one Hunter style.
As I inched along the wall of the upper section, coming from the tower opposite the path you’re supposed to take, I shot the mobs one by one. Pulling them over and silencing them before dispatching them quietly away from prying eyes. I had to kill four this way before I got to the crates and could see the cut scene of Deadeye turning into a weird dead looking Horde with spikes.
After the cut scene I was transported back down to Kadgar and Garona. Turning on the quests they disappeared and I was left looking at Hordies.
Thanks for that!

After completing that nightmare I was at a loose end. I’d got a couple of raid achievements that I needed a hand with but started looking at my professions.
I’d looked at making all the research I could to get all the glyphs and then thought about making all the Hunter glyphs but it was a headache having to flick between the inks tab, glyph tab and then the auction house and by that time I’d forgotten the seven herbs I could use to make the ink.
As mentioned before, my computer isn’t the quickest thing in the world so I can’t run wowhead and wow for long before my fps drops into single figures. It has meant I’ve turned to fashioning myself a paper form of my most used Wowhead pages using flashcards. 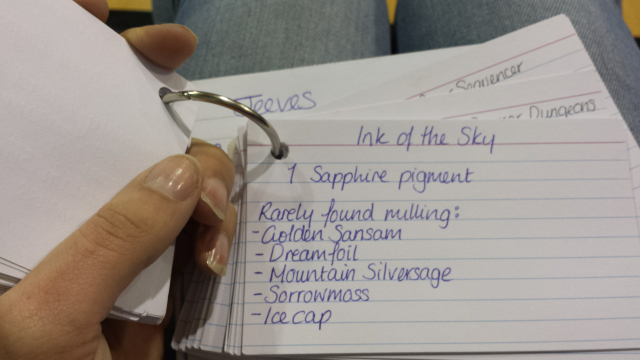 After writing out all the inks I decided to take a look through my engineering. And my engineering button was right next to my inspiration on what to research making.
Walter was sat there with his little ‘2’ icon. It made me think about when I was last in a raid and the Horde were being very unfriendly and wouldn’t let us put a mount up. We had to coordinate repairbots so we wouldn’t have to go outside.
Scrolling down to Jeeves, I’d collected all the plans for the components to make it but never got any further.
I wrote everything down on a piece of scrap paper and then checked the auction house for bits.
Two hours later, which involved lots of calculations, smelting, farming and nearly being stuck in a Wintergrasp battle. I’d nearly got everything and I was 4k lighter in the gold department.
The last little bit I needed was King’s Amber.
Turns out there were npc’s who sold it for justice points or honor. Not anymore though.
Looking at my scribbled notes on the possibilities my options were; prospecting it from ore, farming Onyxia for her gem bag, getting a jewelcrafter to create an icy prism or finding an alchemist who can transmute it.
The idea of farming ore again was not something that made me jump for joy. However I’d have to go down that route for three options anyway. So I went to Onyxia. The gem bag dropped. Twice on two chars (it was late and I couldn’t be arsed taking the others over there) but both bags contained one solitary Dreadstone.
Now locked, I had to look up the other options. I had previously sold all of my gems so had nothing at all on me. For the prospecting and icy prism I’d need to farm a lot or spend a lot of gold. Transmuting seemed the only viable option. There was a snag though…

So I would need to find at least one alchemist who was able to do it, if I was able to do it on my DK. Otherwise, I’d need to find two.
I went to the ah to find the lesser gems, Autumn’s Glow. Annoyingly there was King’s Amber for sale at 300g per gem. I’d spent far too much already so really wanted to reel in the throwing gold at the auction house. Glow was up for 9g each, bargain. Now all I needed was the Eternal Life to finish up the mats list.

When I was creating the Titansteel I had bought the mats I could (before I started wincing at the cost) and farmed the rest. I had a bunch of Eternal Earth, and I was hoping that I had found the recipe to transmute it to an Eternal Life. No such luck.
The recipe was available on the ah. For over 5k. No. No. No. No.
So I bought the Eternal Life and hopped onto my DK to double check if she had the transmute recipe and if she didn’t, then get it.
I went off to Dalaran. Going straight to the ‘retail zone’ looking for the Alchemy place. I ran around but just couldn’t see it. I had to ask a guard. “It’s the one with the doorway shaped like a giant flask, you can’t miss it!”
Well I did, so I can.
When I did find it, the bright blue bubbling doorway, I ran in to find who I was looking for and the conversation kinda went like this…
Alchemist: “I have a job you can do for me”
Me: “Oh yeah? What’s that?”
Alchemist: “Transmute me five amazing gems from some shitty ones and I’ll teach you how to make another one”
Me: “Errr. I don’t actually want to know how to make that gem so I’ll pass. So, do you sell anything?”
Alchemist: “Err no. Clearly I’m too intelligent to just ‘sell things’. Ask that wench behind the counter…”

So I asked her. And she must work in the most epically rubbish store in Dalaran as all she sold were empty bottles.
I did what any disgruntled shopper does, I just walked away.
I ran to the anvil to do my living steel cooldown and then had a flick through my other recipes.
Holy shit. I already knew how to make the gem.
But…
But it said cooldown resets daily…
It’s a shared cooldown with crappy living steel.
Enough fucking around. I walked into the auction house and bought the damn things. 440g although this time it was from the DK’s money pot so I didn’t feel too disheartened.
Mailing them over, and logging onto Zionxi, I finally made Jeeves. Being impatient lead to it costing me nearly 5k!
Best run a lot of old raids to get my bank balance back up to a level where I’m not having a mild panic attack every time I look at it.

One thought on “Garona and Jeeves”