Those purple BoEs, that’s what we love.
Greens just mean a bit more gold to cover repairs. Blues might be interesting for mogs.

While on our way to Kormrok we were clearing Trash in the corridor. I still had powershot on and those knock backs…
(Which reminds me of when we were clearing the dogs in Upper before you decide to go to Xhul or Fel Lord and I had powershot on again, Aska called out “Random knock back…?” and I just giggled as I watched the melee chase this dog that had gracefully flown through the air…)
We were on the mobs stood down the stairs that cause the green orbs to give you the cooties. As they pulled them, I clicked on the sparkly corpse by me feet and was given loot of unimaginable greatness.
Not only did I steal the gold out of the dead orcs pockets, I also stole something a bit more personal. His pants. 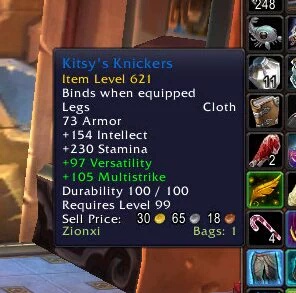 Or to be more precise, his knickers.
It begs the question, who is Kitsy? And what was this orc doing with their knickers in his pocket?
These drop from a lot of mobs so Kitsy must have an extraordinary high underwear bill… And a fetish for giving their knickers out.

The actual knickers look awful. One can only imagine Kitsy is someone still alive from the first war to be wearing bloomers like that under their robe.
Does that mean Kitsy is an old lady giving out her pants?!? They also cost 14 gold to stitch them back up after you’ve torn them in battle. A good wash wouldn’t go amiss either…

It also reminded me of a snippet of conversation I had from a raid a while back which I’ve been holding onto for the right moment. Which happens to been now seeing as I pulled these horrendous things out of a dead dudes pocket.
We were coming to the end of the raid and Blackdahlia needed to leave.

“Do you think I can drop?”
“Your pants?”
“I can’t drop my pants…”
“Because you’re not wearing any?”
“Bingo”
Which resulted in ketod sighing over TS.
“Too much information…” he mumbled.