We did alright last night. Cleared lower, got our ring upgrades and getting there was fun too.

When we started on Manny. It took some of us a while to get there though as we took the wrong portal despite being there who knows how many times. Surprise surprise it was the usual suspects… 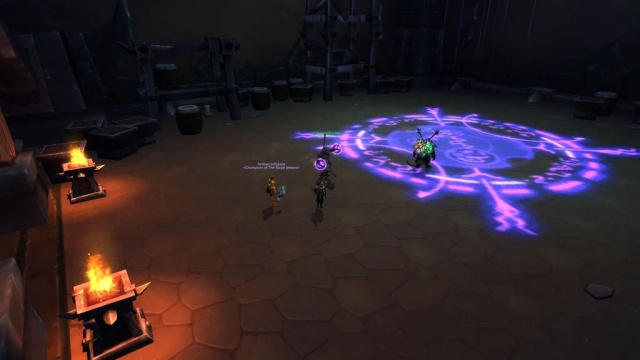 After we killed him we went out to reset. We took a break while loot was being given out and Jolly reset it to HC. There were some Hordies outside so we all took to our mounts to keep out of trouble.
Jolly ran out, reset and then told us it was ready. And then started attacking the Horde.
“Oh. I pick a fight outside and you all go in…” He said with a dissaproving tone.
“I’ll help you” Opala offered… “You big pussy…”

The RT2 banter carried on, on our way to Kormrok.
Upon entering Hellfire Citadel we were carefully CC’ing the adds and the plan was to pull them one at a time. It did not go to plan.
Three of them were pulled and the big guy lumbered into the fray as well.
“Or we pull all of them?” I offered as we were running around trying not to be hit by green balls.
“Nahh! There’s a sheep left….”
Which instantly made everything alright as we had managed to control ourselves enough to leave just one lonely add in its CC.
The discussion of hunters and how they are to blame came around while we were battling through the Trash in our way up the stairs. I announced that I was using barrage when I was silenced!
“What the fuck?! Who pacified me?”
There was laughter all over TS.
“Oh it’s too easy Ella…” came the reply from Ketod.

Standing in the doorway to the boss room, Jolly pulled the first pack and announced that there was a new Advanced Lesson video coming. This time to see if you’re a bad raider or not.
“Ella…”
“Hello”
“You’re screwed”
(I see how this is…)

At that point there was a wail over TS of “Ahhhh” as Jolly sailed through the air due to the knock back from the Trash and he landed at the feet of the big guy in the middle. Who was not happy to see him.
“Does bad positioning make you a bad raider?” I quizzed.
“I’m not giving anything else away” Jolly replied.
That’s a yes then…

We congregated by the orange pool and as I was patiently waiting I was pacified again.

“I think we’re calling Ella a princess because we keep giving her a crown” Insaria quipped.
“Bow down bitches” I added, although no body did…
I was sending a tweet out (LOVE that feature) When I suddenly found myself in the orange pool itself and rapidly dying.
“Is Ella afk?”
“No, I’m here you bastards, I was sending a tweet!”

Jolly put a ready check up and people were surprised it was all zeros.
“It’s been like that all night!” Jolly exclaimed.
“We’ve only just started raiding…” came the reply. “Give it a chance…”

Kormrok was a breeze, he fell over rather easily and we moved on to trash up the other staircase.
“If anyone is unsure of what they are doing on the next one, just barrage. That’s standard operating procedure, right?” Jolly added.
I was busy scribbling things down for later when I saw an opportunity too good to miss.
Ketod was standing next to a big crack in the floor which is filled with green goo. The crack is big enough for you to fall down and die. I should know as its happened to me.
I targeted him, positioned myself and clicked the swapblaster. I was totally confused to find myself stood net to him as he didn’t seem to have a neutral silencer on. I turned my camera around to see Ant clambering out of the hole.
“OMG Ant! Sorry! That wasn’t meant for you!”
I had to wait until it was off cooldown to try again, hoping that he didn’t come back to his keyboard to see what was going on.
3
2
1
Swap!
As he was dumped in the goo I skipped off a little to see if he made a move out of it. Nothing. I ran after the rest of the team and watched as his health dropped. ‘Dead’ popped up in his raid frame box and I giggled over TS.
“Why is Ketod dead?”
“I may have killed him…”
I got a whisper a while later ‘was that you that killed me??’ ‘Maaaaaaybeeee’ I whispered back.

We went painlessly through Council, Kilrogg and Gorefiend.

Although, I found a nice invisible ledge to stand on and myself and a few team mates just stood on it looking smug while we left the rest of the team five feet away trying to slaughter the trash. We have a good sense of responsibility in this team!