I was chatting to a guildy about the new changes to the Hunter pets coming up. I’ve had a look at the changes to them (Spirit Beasts are now Tenacity etc…) and we were talking abut how things used to be with talent trees, thinking about how you could have three BM Hunters and they could all be slightly different. I liked that, I liked the talent trees for both me and my pet, alas… Blizz thought otherwise.

It got us on to the topic of buffs and how I used to always bring Snuggles the Spore Bat with me to give the haste buff to the group. How my stable had pets in it that enabled me to do my job and helped others do theirs. We were a jack of all trades and a master of none but it helped. It didn’t make us better than someone who could also do the job, we just plugged the biggest hole. I liked Snuggles, he was fucking ugly and he threw his ass in a circle as he moved around but I had gone out of my way to find him and tame him, I could have just gone for the closest, easiest one, but I looked through all of the pets on Petopia that gave the haste buff and picked him out of all the fluffy looking bastards that I could have had. (I still have him, and the memories of raiding that come with him.)

The announcement of the changes to pets had got a lot of Hunters pissed off. Mainly due to the fact that while in Legion, there was a plethora of different hunter pets being brought to raids now, instead of taming whatever pet looks cool for you, you are going to be bringing specific ones that can assist the raid in the best way. This is completely contradictory to them saying that they don’t want all Hunters coming into raids with specific pets, which didn’t even happen in SoO as we had a more varied option to bring for just one missing buff for example. If one particular pet is going to do what is needed better than all others then a vast majority of Hunters are going to be going in with the same pet or at worst, expected to…

They also were talking about spreading the ability for Hero/Bloodlust to a greater amount of pets to enable greater availability of it (so fuck off Shamans and Mages, you’re not needed anymore?) which is all well and good but did they forget, as someone pointed out, the leatherworkers that are now going to be begging in the streets, surrounded by their unsold Drums?

They also seem to have put the ‘two pet’ option for BM onto the same line as Dire Beast. The question is does that DPS increase from Dire Beast match the same amount that our second pet will do with its obedience to Kill Command and it’s auto attack?… The feeling is that they waved the carrot under our noses and then yanked it away.

Looking at the pets that actually have in my poke-wow-balls its not looking good. This set has been my go to set and I specifically tracked each one of them down because they did what I needed and I loved the look of them.

I have RaidWiper, who began life as Gondria. Hes been at my side for years causing havoc and mayhem everywhere he goes. He still has his heal due to him being a Spirit Beast and now hes Tenacity he also gets a bit hench but is it going to be enough now that there are other things that a raid leader might believe are better than my loyalty to my stupid see through cat?

I tamed a Quillen from Mogu’shan Vaults for the Rebirth ability (Battle Res) and named my pet Coffee. The whole point was that Coffee perks you up! Looking at it now, Rebirth has gone from ressing a player to ressing the pet. I mean, that’s great and all, but I have fucking revive pet to do that. So it looks like Coffee is going in the bin as now he is worthless.

Grr is my Tank. His main point in life is the grring. My go to solo pet when taking down the shit lords on Argus. His natural tank abilities have been ramped up with the extra hench mode on Tenacity so hes likely to stay. Plus I stole him off a Dwarf (an NPC not a player!)

Then I have GrowlOn. My fucking huge, noisy, annoying Core Hound. He’s there to get the party started or to elevate the effectiveness of everyones panic induced button mashing thanks to Hero. He doesn’t have growl actually on. He’s annoying so I named him after the most annoying things Hunters can do.  But hes ferocity, so he might end up being used more than Raidwiper due to his fire spewing buff thing. i cri.

I don’t actually have a fifth pet on me as that spot is there for anything that I might want to tame while I’m on my travels. I do, however, have about 35 back ups that I can equip into that slot…

Over on Wowhead, there is a guide to Hunter pets for BfA and there is already a five recommended pets for BM. So it looks like most people will be running with these five same pets, just in different colours. Regardless of if you actually like the pet itself or not. I fucking hate bats, but that apparently the second ‘go to’ pet to have… If you like your mechanical pets, especially if you’re a Gnome Hunter then its looks like bad news for you as your raid leader is likely not going to be impressed with that. We’re going back down the road of people being kicked from groups because they don’t have the ‘right’ thing. Be it talents or pets. “Bring the player, not the Class” they said. Not sure that mantra got to everyone in the Dev team.

Their number one recommended pet is a Spirit Beast so that you can have their version of Tranquillising Shot and also their heal is getting a huge buff. So maybe Raidwiper being a Spirit Beast will enable him to be the beast of choice, for me and every other BM Hunter out there.

This change seems absolute wank. There’s absolutely no reason to prioritise this as a ‘needed change’ when what they should have been concentrating on is sorting out why pets get stuck on bloody stairs or why they cant jump off a tiny ledge in a dungeon and run all the fucking way round pulling everything from a peon in Ogrimmar to Ragnaros… Or sorting out why pets get stuck? One of my previous posts detailed how my pets got stuck looking at the corpses of imps rather than actually helping me kill things.
I’m beyond mad that they got rid of every single battle res from pets. They essentially gave every single player the ability to use Hero/Bloodlust but one pet that can res? Nooooooooo. Hello? My pet is a fucking ghost, I think one of them could manage to bring something back from the dead.

I pulled a miracle res out of my ass in a mythic plus where we lost the tank and we had no BR class with us. As quick as anything, away went RaidWiper and out came Coffee, getting the tanks sorry ass back on his feet. Now that’s not going to be an option. If I’m doing a fun run dungeon set with friends, we have to have a DK or Druid or Warlock for that matter for those oopsy moments, and a Shaman or Mage for dedicated Hero/Bloodlust (H/BL pet isn’t as good as the Spirit Beast and dps loss swapping them out). My rage might be misplaced, but it has pissed me off that I can no longer bring the utility that we desperately needed when there was three Pallys and one DH and then me. It’s going to fuck us over and I’m not ok with that.
Utter utter utter utter smelly gangrenous cock buboes.

I’m just glad I got stupidly attached to a Spirit Beast because otherwise, I’d be fucked. And that’s coming from someone who still has their first ever pet ‘Raider’ the wolf even though hes ugly and he got me in a whole heap of trouble.

I like my pets because they mean something to me, now whats important is how much they mean to someone else.

I had a search though for sims for the tier 1 talents to see how Animal Companion compared. The carrot being snatched away is not far from the truth as it appears that unless you play a specific build on single target fights, having a second pet puts you in a worse position than if you picked no talent at all from that row. Wtf… 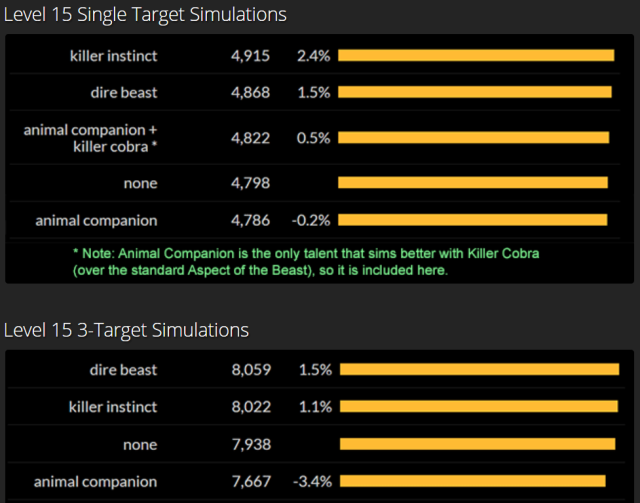