I found a post linked on the forums where players were discussing their best bits from this expansion.

Legion had been around for a while and although I have to say I haven’t played much due to a pesky Law degree getting in the way, I do still have some memories of bits that are going to be eternally funny or memorable. Most of these might only be things that have happened to me but I’m sure that everyone can remember something similar to it happening to them…

Ok, so let me explain. There were quite a lot of funny memories from LFR this expansion, but the last two raids were definitely the dogs-bollocks when it came to fuckups and sheer anxiety over if we were going to die.

This one split those who had done it on normal and above from those who had well, not. Raiders asking before the pull who was going to be in the soak rotation only to discover that this was eezee mode.
The biggest issue was when you make the copies of yourself. People ‘got big’ and ran away despite almost the entire raid telling them not to, people were trying to grip them in before they exploded and created their copy. Alas more often than not we had images all over the platform, shooting everything in sight. The shadow phase was interesting, especially when we had one hunter and all the pressure was on them to click on Illidan, which again, more often than not didn’t happen. So we were all running around like headless chickens trying to find him while also trying to not die…
Generally, it wasn’t a hard fight, especially on LFR but people just didn’t do what they needed to/read the chat to see the instructions/read the dungeon journal… It was hilarious and agonisingly painful all at the same time, like all good LFR’s should be. I went into this raid only two days before publishing this and we were still wiping on this thing. Armageddons weren’t soaked, people kept sunning away when they got big and people were just standing in the middle of everyone when they had the circle around them… Jesus take the wheel… 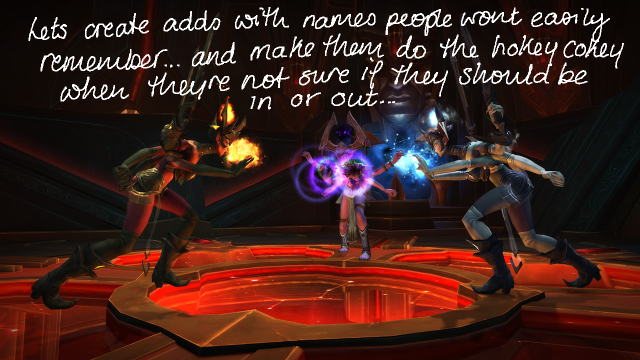 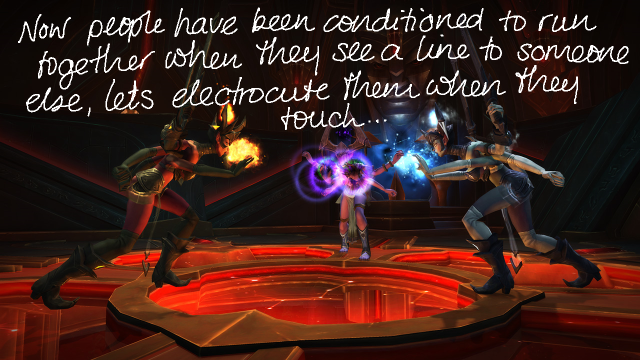 Already the ‘pug killer’ raid it was a disaster in LFR. People were rage quitting left right and centre as people just hadn’t got a clue what was going on. Now, I’m not going to pretend that I remembered the names of all the different add things that were brought in. I had to rely on DBM to give me the little icons to work out what part of the hokey-cokey I should have been doing. The funny part was watching half of the raid going to the place they should be (eg, the edge for the fire ones) and watching another group in the centre. The pleading for them to get out of the middle grew to a crescendo but like frightened sheep, they just didn’t move and they got a first hand experience of what happens when you cross the streams…

Ruiner. One noise that strikes fear into my heart especially as a healer was the DBM klaxon that went off when that thing was about to cast, and praying that you started running in the right direction if it was over your head. People died by the thousands (exaggeration) dropping where they stood as they either didn’t move because moar dps! even though a dead dps does fuck all or were afk and thought that they could read Buzzfeed while everyone else did all the hard work. I am happy to report that I life gripped a total of zero people out of that as fuck ’em.

The first phase was always quite funny when the green shit came drifting out and the ones who were geared for it could just soak it while there were those who thought they could just do what the bigger bois were doing and then they died. The real fun happened when we went down and hit the platform. People would tank it in stupid places and we would end up with a whole quater of the platform going in the first strike, leading to the entire raid perching on one solitary piece while tanks and any DH who felt they would sacrifice themselves for the greater good went out into the Fel to try and bide us some time. I lost count on the amount of times we ended up with no platform and begging the dps to try and kill it before we all died. Those times were often accompanied by the yelling of some clever clogs, telling everyone to use a health potion while were were drowning in the green stuff…

His dialogue was gold this expansion. From dropping all his coins all over the Broken Shore to forcing you to gather a zillion shards, only to actually need a handful. Lets not forget his baseball practice at Azurewing Repose.

“Maybe make then touch?”  – Tears of Elune questline.
<Khadgar pats you on the head> “Good job.”

Essentially, Legion has been this so far…

3. Jewel of Hellfire use in dungeons This bad boy finally had its use in a dungeon I was running with a group of friends. We had a 15 key (it was some time ago mind you) and we were woefully undergeared. It was literally a piss around to see how far we could get before we were totally destroyed. The dungeon we had the key for was Court of Stars and we had a kill count of about 150~ and we had got the asshat that summons in all the imps. We kept dying and then pulling mobs as we were trying to get back to the boss only to die again. We were resigned to it just being a complete failure of a dungeon but the hilarity of it kept us going. They started invading the res point which I found to be a prime time to use this toy and spawn next to my freshly ressed team mates as a demon goat. They shat themselves and there were strangled screams over discord. It was so worth it.

Jesus take the wheel. The panda is back, baby and if anyone tells you that his appearance and shenanigans in Dalaran wasn’t funny they are wrong.

The complaints about his ‘burnt food’ made us all give Gordon Ramsey a run for his money. But truth be told, we didn’t really need him to cook much for us, just turn out some average shite so we could collect the other recipes he managed to produce. Lets face it, he tried the basic recipe, fucked it up but worked out how to improve it and get it right and then gave the new recipe to us. He wasn’t all bad, no matter what nasty things we said about him. The fact that our combined hatred of the fluffy bear was so great that they decided to do a stress test with him as the raid boss just proved how attached we had got to him. (The chat is pretty funny too.)

Illidan is bae. His return was nothing short of epic.

From the moment that he is busted out of his giant green prison you knew that shit was about to go down. Follow him into the Abyss? Hell yeah! Things only got better as you witnessed his visions from his past. The final showdown after defeating Kil’jaeden and seeing Illidan bringing the fight to us with the chilling ‘sometimes the hand of fate must be forced’ reminded us that we were still not as prepared as we should have been. And who can deny that the sound of his hooves as he berated Velen was the new soundtrack to badassery?

My favorite bit? Aside from playing as him during the raid on the Black Temple, it was when he destroyed that fucking windchime Xera when she tried to turn him into a Night Elf version of Lothraxion….