I’ve trawled through the gripefest to discover whats been pissing people off this week and boy, do we have some good-uns.

If you are on a low population realm, how do you get content done?

I am asking because I went guildless this week, and by doing so, I realised my server has died behind my back. The realm forums only have what equals previously 1 page of posts, according to WoWprogress there are only 36 guilds on my server that has killed at least 1 boss in the new raid, and the guild I left, is now nr. 8 on the server on progress. A very casual guild who only raid heroic. 5 of these guilds are also Horde, so that leaves 5 Horde and 31 Alliance “raiding guilds”. I have also talked to a few people who did the same as me and ended up going back to their guild when they realised there was “nothing” else on the server.

This also means I am out of options, because looking through the guild requirements, the one I left was the only one who fit my schedule with raid starts and amount of raid days(1-2 nights).

I have joined a “PuG community”(where I’ve noticed a few others from here are located too), but I realise I will have very little control of when and if I can get content done(in a guild you learn to predict a little how fast you will progress). The community itself looks promising though, but I’d like to “get back on track” as fast as possible as I was really looking forward to both the raid and the dungeon this patch, so if you are on a low pop realm and guildless, how have your possibilities of progressing turned out? Realm transfer is not really an option for me.

Does anyone know if they are planning any further server merges too perhaps? Mine is already merged with one other, but right now that seems to do nothing.

More so when Dragonmaw got merged with four other realms to prevent it ‘dying’, which then just seemed to force people who were Alliance (and could afford it) onto completely different realms.

Dragonmaw on it’s own was classed as balanced due to the Horde slightly outnumbering the Alliance but not by much. You certainly couldn’t see it out in the world (we were a pvp server back in the day) the issue was that we had a server that for example accommodate 5000 players but we only had 500 on there. So Blizz decided to merge us. We got one, then two, then three… and that was ok. I believe it turned out to have a slight Alliance majority at that point.

Then they added Stormreaver. Which was almost entierly Horde.

So, pulling some random numbers for an example, we had 1000 Horde and 1100 Alliance before the last merge.
Stormreaver being added turned it completely on it’s head.
We then had near on 3000 extra Horde which made it pretty much an uneven nightmare out in the world if you were levelling. When the expansion was announced, people started to make plans to leave.
I’m talking about whole Alliance guilds. They left because they didn’t want to deal with the shit show that levelling would be.

Stormwind went from having nearly all players hanging out there at one point or another to being deserted. Even Shrine was deserted where before, we were quite happy having our Horde/Alliance games of ‘chase me’ or epic pvp battles on the roof of the respective Shrines.

The struggle for recruitment is a known beast, especially when your faction is severely lacking on your server/connected realms.

It also can feel that you never seems to see anyone of your faction outside of the capitals.

But you never really know what is going on, is the imbalance actually that bad?

Further down the post, there was a link to Warcraft Realms. This is something that I hadn’t looked at in a long time seeing as I went away to Sylvanas.
There is an addon that you can take a ‘census’ of your realm. It calculates players online for the faction of the char you are currently logged into.

I decided to have a look.

And then for good measure…

What’s interesting is the ‘fullness’ of these realms, which you see when you are picking what one to play on.

Forgetting about sharding for a minute, lets just look at the realms themselves. 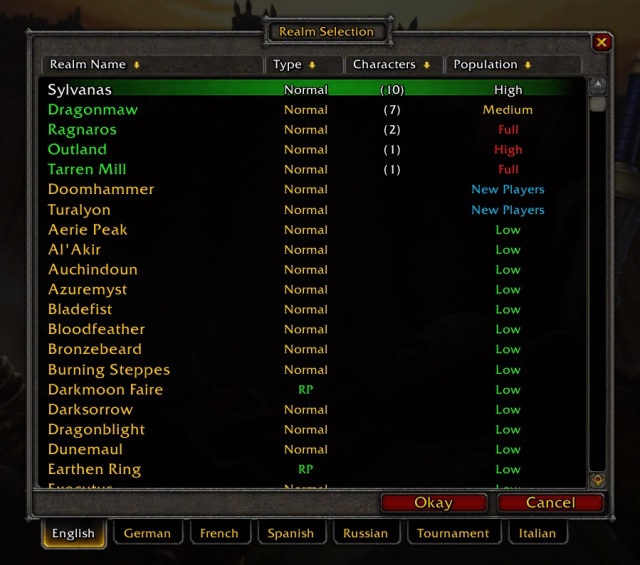 Ragnaros and Tarren Mill are both ‘full’ so you might skip those, but Sylvanas is ‘high’ and Dragonmaw is ‘medium’.

What this isn’t telling you is that the realm is going to feel ‘high’ or ‘medium’ only if you play the dominant faction. And by dominant, we mean dominant.

The flip side is experienced on Dragonmaw but not as severely. Alliance players are not going to feel that the realm is at medium capacity.

The half truth going on with the realm list before you pick one to play on lulls players into a false sense of security that the realm they are picking is going to be bristling with activity for the character they want to make.

This is more evident when you see that Dragonmaw is listed as ‘medium’ but it is connected to four other realms, which each say they are medium. So… does that mean that those connected realms should be absolutely bursting with people because 5x half full realms or do all five realms together have the amount of players that would be considered medium capacity of just one realm?
If we use the example that a realm holds 2000 players before you have to queue to get in. Does that mean that the connected realms have 1000 players each or is it 1000 players spread across the five realms… Turns out, it’s the whole group of players from all five realms are equal to a medium level on one realm… That’s disappointing and disheartening as the ‘medium’ listed on each realm in reality is ‘low’

Sharding has gone some way to sort out this imbalance and create fullness of sorts whatever faction and whatever realm. But it only really worked when it made cities feel full.
Before the abolishment of PvP servers, sharding led to people realm hopping for ganks. People were not sharding in on Blizzards terms to create more people in the area, they were using the system to roam all the realms, leaving behind the ones that they felt had nothing to offer them anymore and phasing into new ones.
People got pissed off with world PvP because they could no longer log their main and hunt down whoever had been teabagging their lvl 28 because that person was gone, never to be seen again.
People couldn’t come and help as there was no guarantee that they would be in the same shard. And if someone is trying to level, you cripple them by being in a party with them. Even if you can now see them.
If levelling isn’t fun due to not being able to get your revenge, people aren’t going to do it. Even those who love PvP give up as there’s no point if you can’t find the person again…

Sharding in itself hasn’t fixed the issue of actual players in the minority faction in guilds or looking for guilds. People who are on the less prevalent faction on that realm/s struggle to find enough like-minded people to create a guild with, run M+ keys with etc… as a permanent group. Which is the experience of the OP quoted to the top.

Communities might have been the plaster over the gaping wound but it does that by encouraging people to play WoW in a way that Blizzard didn’t really intend.
The inability to trade because you’re not on the same server as someone else, the lack of a Community Bank (eg a guild bank) makes it painfully obvious that you’re just in a big chat group. Yes you can raid and do dungeons but you are effectively punished by the lack of options that are available to actual guilds.
Guilds are a big thing. Actively encouraged through the guild finder tab and something so small as all having the same name above your head, can make the difference of feeling like you are in a RPGMMO compared to just a solo story with lots of people being visible.
It certainly hasn’t addressed the faction crisis that’s going on currently on individual realms, regardless of the almost perfect balance that is going on overall.

It’s all very well and good seeing the ‘bigger picture’ across all realms but the player doesn’t experience the bigger picture. They experience the realm they have logged into.
And currently, some of those realms for some sides of the faction line are offering a limited opportunity to those players due to the difficulty of guilds on those sides and as shown in the examples above and the OP’s experiences. The connected realms seem to have just looked at the total people with chars on there rather than considering the faction splits.
In an ideal world, Sylvanas and Ragnaros should be merged. That way we can have the utopia of faction balance but unless they do something about equalising how players can truly interact across both realms, then the minorities are going to be left with a less whole experience than those who are on the right side of the faction line on their respective servers.