I was on Emava going through my patterns and was linking a few to Farouche who was on his Pally.

I wanted to get a slutmog going for Pazima but the ones I could make were all a bit, well, tame. I remembered that I had a dress that I was given by Monknessa for when I hit 90 that was booby, I linked it over and then had a wonderful thought when he logged back on his main…

[Emava] you should try on my mail
[Farouche] it’s going to look stupid but yeah link it all 😀
[Emava] relog!

With that, I logged on Zionxi (for absolutely no reason as with the Alt-O-Holic add-on I can go through all my characters banks) and started linking the items.

I know from wowhead that males are more ‘covered up’ than females in the same bits of gear. Arse cheeks hanging out don’t look so good on the hulking males of the species. I was expecting Farouche to look like some sort of glittery Butlins employee, what actually happened was ‘spectacular’

So here is me from the front. Tits out? Check. Tiny pants? Check.

And me from the back ( particularity fetching when swimming) Arse out? Check check!

When Farouche sent me a snap of his char… dear lordy… 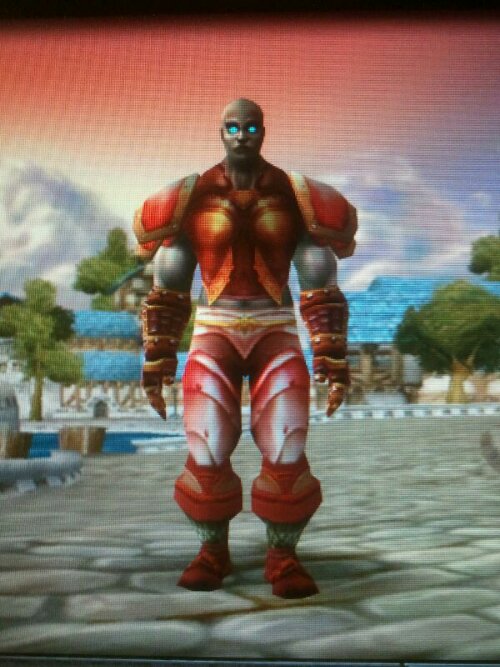 Ignoring the dead skin tone (dK’s can’t have it all) and the glowing horror movie eyes your left with someone who put their pants on over their trousers and decided it was a-ok to put on some glittery shit over their tunic like they were a body builder going crazy with the bronzer… The rear was just as bad, if not worse. 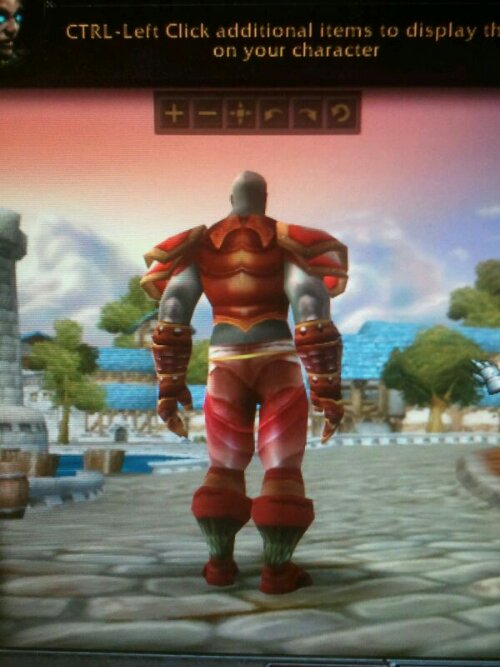 I’m sure there is actually a hint of bum cleavage going on there and the point of the vest just looks like his char was going for the ‘trousers hanging off my arse’ look.

I know Blizzard can’t separate gear to be male/female, hell it’s bad enough seeing something that looks great and seeing that is something you can’t wear, so they seem to create gear for females and then ‘fill in the blanks’… literally.

Just maybe they need to hey someone to have a look at both genders wearing it before they go ‘that’s the one!’ and then take a cold shower…