RT3 have been working our way through SoO normals. While we struggled for a while getting enough players with the same commitment and attitude we now have found a great bunch of people who ‘live for wipes’.

Last night we were on Malkarok. The back to front boss. Move away from the markers and stand in shit.
We had a few messy moments as we got to grips with the puddles. I had the task of marking. Which was interesting to say the least!
I’d been doing it with the camera as far as I could make it go by default and Tsff said over TS about if you zoom right out you can see the whole ring. I’d completely forgotten about the script that Blunnerz had said about a few nights before.
Here it is for those who don’t know:
/script SetCVar(“cameraDistanceMax”,50)

It mad things so much easier. Yes, I couldn’t now see who was who but I was at least able to accurately put down the markers to make sure we knew where not to go.

I did have my moments however:
I had forgotten to clear the markers at one point, so while I was doing that, I forgot where the cone attack went. We were a marker down and then no one knew where to go… oopsy.
I was busy putting a marker down and completely missed the puddle that was right behind me… oopsy.
I was trying to put a marker down and accidentally started a role check… oopsy.
After one round of cone attacks and putting the three markers down I yelled at everyone to stack up… we were still in phase one and I had got over excited… oopsy.

This boss wasn’t particularly difficult, it was a lot less confusing that Shamans (which we have managed to skip blissfully over) but with this, timing is everything. too slow to move, you’re dead. And that happened a lot…

Once we had gotten past the first phase, it was a lesson in cooldowns and cookies. After a few wipes on the blood rage phase we decided that we just needed to pop cooldowns and stand there a bit to share the pain.

After a valiant effort and an agonising cry when we wiped at 5% we knew we had him. That massive shit was going down.

And finally we did it! 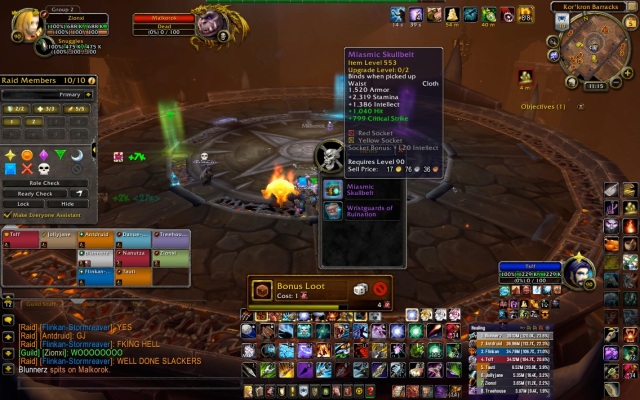 Tonight was particularly fun. We had managed to find our way to Spoils and were faced with splitting up and working as two little groups.

This was a good boss for practice makes perfect as we could have a crack at both sides.

We had Team Diamond and Team Triangle. Diamonds went to the Mogu side first and Triangles got the Mantid side. At first Tsff and I were on the same side, which meant that there were two players comfortable with instructing on one side and then the others were kinda left to their own devices… I swapped to Triangle and took the lead with directing Jollyjane around 🙂
(By directing, I mean shouting “MOREMOREMORE, STOP!” at him throughout the fight)

We had a random way of going about things on Triangle, where Tsff had a nice methodical way of doing things. 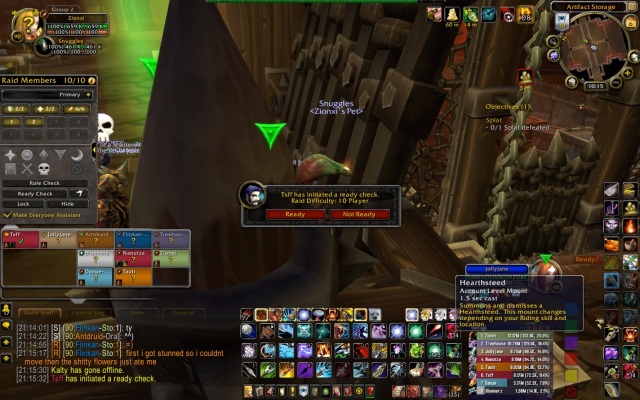 Although we had a good practice and we got quicker and quicker at getting through, neither side managed to make it through the gates at the same time as the other side. We geared up for another attempt on the other side to what we were used to just so we can get practice in for when we launch ourselves through the gates. Ant needed a flask and when he was asked on TS what one he needed he then typed in ‘Toilet break’. After letting him know that there wasn’t a flask called that he then said “warm flask”. So Ant needed a flask and a toilet break, and the result of that was a warm flask… eeeew! 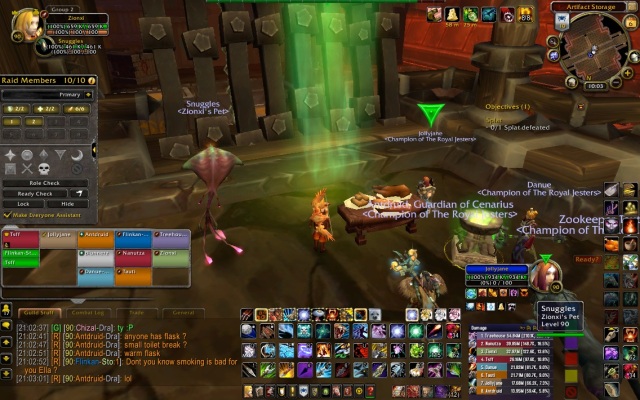 And yes… I needed a smoke after all of that!

Once we had enough attempts for the night Blunnerz showed off his skills by jumping on the box in the middle. It then meant that everyone wanted to jump on the box… and could we? Not for your life! After a few (hundred) attempts at jumping up I set my charachter to walk rather than run and turned away from the group and stated ‘Fuck this shit. I’m walking away!’ To then have Blunnerz ‘leap of faith’ me onto the box. 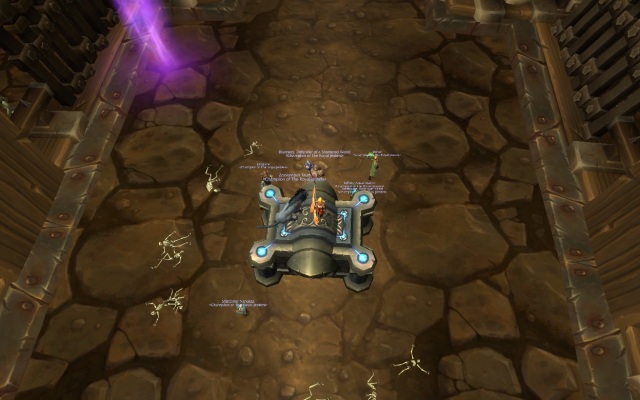 We also somehow managed to get a mailbox inside the box in the middle and had people running around it until they found the point where they could get the mailbox click icon to come up. And there was an amusing part where for some reason my UI decided to reset itself (ahmahgahd) and I needed to exit the game and set it up again. When I got back in, I was inside the box. It has gold in it should you wish to know. Why Blizzard decided to actually put something in there I do not know but I was jumping around and all people could see was my pets tail flapping around outside of the box while I was doing it. 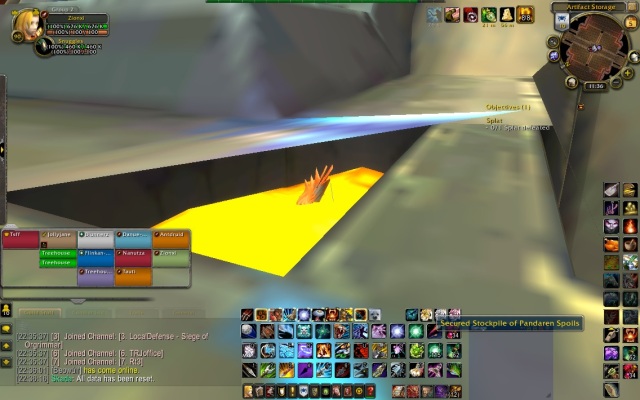 Actually, thats a lot of gold… I’m buried and thats just the tip of my bow poking out!

One thought on “SoO back to front and upside down.”