After our raid-empty valentine’s weekend we all got back in the saddle and rode off to Blackrock Foundry once more to tackle the trash and bosses again.

We all convened at the stairs to deal with the hideous trash. Knowing what was going on this time, we managed to avoid too much death. The corridor boss didn’t claim any lives, the trash on the platform was contained so we didn’t anger any mobs below. Even the named trash before Gruul was taken down without a hitch. I’m pretty sure we even one shot Gruul himself.

We had planned to skip Oregorger (aka: Oreygorgygerry, Gerry for short) and go straight for the Beastlord. This meant going back through the corridor boss and to the right. As we congregated at the top of the next corridor to wait for those who were sorting out gear that was won eventually everyone got there. We ran at the mobs, pulling the pack behind them as well to deal with the random rhinos wandering about the hallways.
As the last one was almost dead someone pointed out that there was another pack incoming. It was at that moment my finger decided that pressing Barrage was a good idea.
“Oh we’ve pulled”
“Was that a Hunter and Barrage?”
I did try desperately hard to keep quiet but a snigger escaped over ts.

Entering the Beastlords room tactics were explained. I flicked to my notes on the boss and added in the species that the mounts were so people knew what they were looking at (like some Iron Horde safari guide)
A sign was put down. “Keep Calm”.

We had a crack, most of us not really knowing what to expect. Spears shot out, pack animals ran amuck. People were being pinned and nibbled on. We got him to 70% before running around like headless chickens stopped working.
Two more signs appeared, one 100 times more inspiring than the other. “Loot Ahead” and “Tears Ahead”. A couple of wipes later we had a 1% wipe. Boooo.

Sorting out some organisation our final attempt saw us utilise more of the floor and get to the spears earlier. My computer decided that now would be a beautiful time to lag.
“Why am I lagging so much!” I yelled over ts but aimed at my potato I was playing on.
“There’s a lot more people here” Marvv replied.
“I miss 10 man raids…”

My lag (and other people’s too) meant that the spears were pinning us a mile away from where they landed. They were mean about it too. ‘You disengaged? Yeah well I’m gonna pin you anyway, but you’re going to be so far away from a spear no one will know what one is pinning you…’ 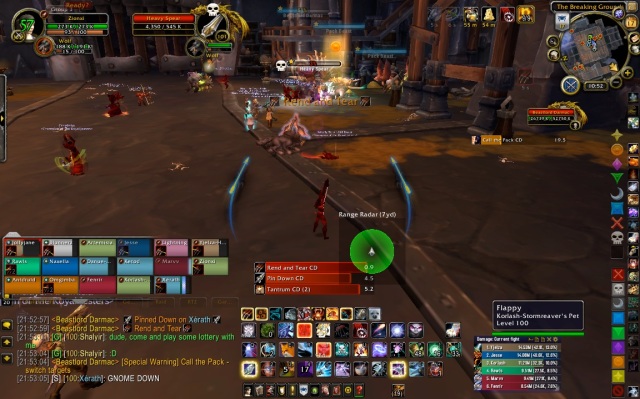 Pretty sure the spears were laughing and to be honest, I was in hysterics. Which then caught on to everyone else. Once the Beastlord had started his final ‘on foot’ phase things did get serious. The pack animals were still coming and the boss was at 2%
“Come on, you got this!” Shouted Marvv. A lot of us were dead and we had about 5 people left alive. 265k… 128k… 67k… DEAD. Many cheers.

Collecting our loot we ran away again. Back to the entrance to get to the other side and towards Hans and Franz. There was a pack of mobs left untouched that we skirted around and got to the ‘lift boss’ of the encounter. We then appeared in a big room with a thing on the floor connected to a chain. I hadn’t been paying much attention to what was going on until I heard my name.
“What?” I asked
“Nothing!” Came the reply
“Hang on, what am I going to do?” I questioned. Completely confused about what was going on.
“I bet 1000 gold”
“You’re on”
“I don’t know what you’re going on about!?”
“And that’s the beauty of it! She has no idea!” Fenrir added.

The tactics were explained by Rawls. In instance chat I asked if anyone wanted to hear a confession.
sure
I have no idea what to do in here
neither do I

This was going to go well…
Rawls and Marvv explained about glowing plates on the floor which lead to sniggering over ts. Rawls kindly explained that they had been taking bets that I was going to get killed by them first.
“WHAT!” I splurted
“Actually! I’ve lost too much gold on hunters! So I’m out.” Fenrir decided.

We started the encounter and all seemed fine. Until the entire floor started moving and blocks of shit came out of the sides. People were running around everywhere and we were laughing so hard. Gio was getting dizzy, Rawls was starting to get motion sickness… It was like watching the entire raid team playing ‘tag’
But above all! I DIDN’T DIE TO THE GLOWING PLATES FIRST!
On the gloriously chaotic run back we were trying to work out how we had managed to hit the enrage timer.
“How did we even hit enrage?”
“Did we use hero?”
“No…”
“Omg that’s why then! It was only 2% with hero we can do this!”
We managed to pull the trash group we had gingerly stepped around before. People were dying everywhere. Releasing and being hit by crap again. Eventually we heard “we can’t release as there’s a dude firing shit about at the entrance”
“Stay dead people! Don’t release so they reset!” And reset they did.

Running back to the lift boss and surviving that we gathered at the platform. After our first poking of the boss and our assault on our sense of direction we were slightly more prepared. We started gingerly crereeping forward and made a conga line on the boss between the belts. Pulling the boss mild hysteria developed as we started running around trying to avoid the hot metal plates. Once that phase was over we could breathe again, no one had died and the bosses were low health as we had remembered to use hero this time. Then the plates of doom started falling. We had worked out that they came down where ever someone was stood before. With the bosses in the middle, I found myself at the edge of the room with people all around me. My fate seemed to have been sealed. All four squares around me started glowing. The people who had previously occupied them all ran away to safe squares while I was stuck in the middle.
Bugger.
All four plates came crashing down and my flattened char was left on the floor. I was the first one to die while everyone else was at full health. More people did succumb to the might of the smashy things but we had more than enough alive to kill it. Small cheers came over ts from those not throwing up. We had conquered a boss most of us had done zero research on as we had been furiously preparing for Oreygorgygerry.

The saddest thing about that night was that we were disenchanting loot. Again.