Two monumental things have happened for us since 6.1 launched. Firstly, we were one shotting bosses that a week ago we were struggling on.
Secondly, Twitter and the selfie camera came into our lives. (which has meant that we have claimed @TRJWoW as our own and have spammed selfies to it mid raid)

On Thursday everyone congregated at the entrance and started pulling trash. I was late (surprise!) and made my way in just as everyone was congregating at the boss. Jolly was close behind me.
What boss they were stood at I didn’t know but I assumed for some reason that they were waiting at Flamebender. I managed to pull a pack of trash that was still up and caught Jolly in the cross fire.
I feigned death on the lift to evade to adds and pretty much left Jolly to fend for himself. As the lift went down and we thought we had lost the aggro it was questioned where we were going.
“Have you pulled trash?” someone asked.
“Never trust a Hunter…” Jolly added.
“Yeah but were almost at Flamebender” I said.
“We’re at Gruul…”
“What? Are we not carrying on?” Jolly and I waited for the lift to go back up again.
“Reset, so we’re going to clear again”
We got back up to the top and the hideous add that had picked on me was waiting. It got me almost instantly.
“Oh dear” Rawls said as the group watched out health bars plummet.
“And Jolly just followed me…” I laughed as we both ressed at the entrance.
“See this is why you never trust a Hunter!”

We got to Gruul and assumed our positions. The boss was a walk in the park.
“OMG did anyone else see that?”
“Yeah! ‘Gruul has been defeated!’ That’s pretty cool!”
Loot was awarded, the next boss on our radar was Oregorger. Lots of small sighs were heard over ts.

As we cleared everything and stood at the boss we braced ourselves to get rolled over and squished. Upon pulling we settled into a routine. Then the boss got hungry and it was a Pac-Man style ‘run around like idiots’ survival of the quickest sort of thing. So many of us were screaming ‘where is he!?!’ as we tried to stay near a healer, open boxes and run away from his rolling. After the first feeding frenzy was over we were stacking up again when some vomit hit the floor near melee.
“Ranged stack up at the back!”
“Oh that’s a bad puddle”
As the vomit forced us closer towards the melee there was a growing concern that we were going to trap ourselves I’d he didn’t go into the second phase quickly enough.
Thankfully (and due to many missed interrupts) he started rolling around again and once finished he was back where he started.
In our comfort zone with the boss positioning he was soon dispatched.

Beastlord was next. Those on spear duty got ready. We made sure we were all aware that the spears damaging circle was now around the spear and not on the boss.
The start went well. He hopped on the wolf quickly and was then went back into his walking phase again. Somehow we got him down to his next mount phase before the tanks had time to drag him over to the Elekk so he hopped into the stupid Rylak. There was fire everywhere. Somehow we manage to negotiate it, running around the red dot that was placed on the floor to show where the inferno breath was heading, the Elekk came and went and then it was us v Beastlord. Popping hero and potions and praying to the WoW God’s it was a race against people dying one by one and the bosses health. We did it, just. But last time we made this boo-boo we wiped so we were monumentally chuffed with ourselves.

Next up was Hans and Franz. The motion sickness boss.
Again there was a lot of fire. Someone pulled some of the second group of adds and I couldn’t help myself and barraged everything in sight. The floor was covered in flames, a tank went down, the melee were running around like their asses were on fire. Ranged were stood on the balcony having a chuckle at them.
When the bosses came down I started messing around with talents, swapping things about. I’d decided to take lone wolf over focusing shot just due to the movement. 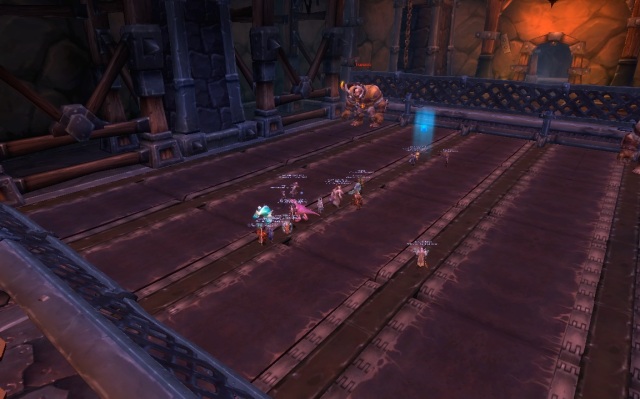 “Oh Ella are you not being pro with focusing shot anymore?” Rawls asked 5 seconds to pull.
Fuck, potions! I swapped it back and just managed to change to Stampede and get my pet out before 0.
Pressing stampede, which I had glyphed to just use copies of my current pet, I watched 5 beasties run over to the boss.
“OMG all of these pets!” A melee said.
“Errr. What is RaidWiper doing?”
RaidWiper and co had found a corpse on the floor and instead of attacking the boss, all five of them were flying between the boss and this random trash corpse. Completely oblivious to what they should be doing, they just flapped around in circles.
Once the plates started moving I was on ‘stay alive’ mode. Finding myself a nice secluded spot to move in and out of the smashing things from the ceiling and occasionally shooting the boss.

There were constant groans over ts as people were going in every random direction due to the plates. The plates stopped moving.
“It’s it safe?” Someone asked
Several squares lit up and sent people scrambling.
“Nope… Now it is!”
Popping everything we had we took them out just before things got too troublesome. Victory!

We then had a go with the train boss. As it was so late we just gave it a couple of light hearted pokes. This montage of fails sums it up rather nicely.