Yesterday we got the Choo Choo boss down. Many tier tokens were had by all,  Hurrah.

We went on to Flamebender, after pulling all the trash before her and getting a trash drop out of it we started the fight. Things were going ok, this boss does stress us out somewhat and there’s a lot of directions being yelled over ts. Still, we need to kill her so we knuckled down on it.

After a few wipes I groused about the Wolves not being marked so was blessed with the power of assist.
The marking was going pretty well. After learning not to use skull as someone’s add on kept removing it we had the switches down better by using cross and square.

I then went to whisper Blunnerz by right clicking on his raid square and instead of clicking on ‘whisper’ I clicked ‘remove’. Several gasps were heard over ts and I was wetting myself laughing as Blunnerz just said “oh… bye then!”
Questions were asked about what happened along with frantic calls to get him back in before he got ported out of the instance.

Composing myself slightly I admitted that I’d accidentally kicked him. Which then set me off with more laughter. People were asking me why and through the tears I managed to find my ptt key and let them know “I was trying to whisper you!”
Without my knowledge, a tweet went out to the unofficial jesters twitter page… 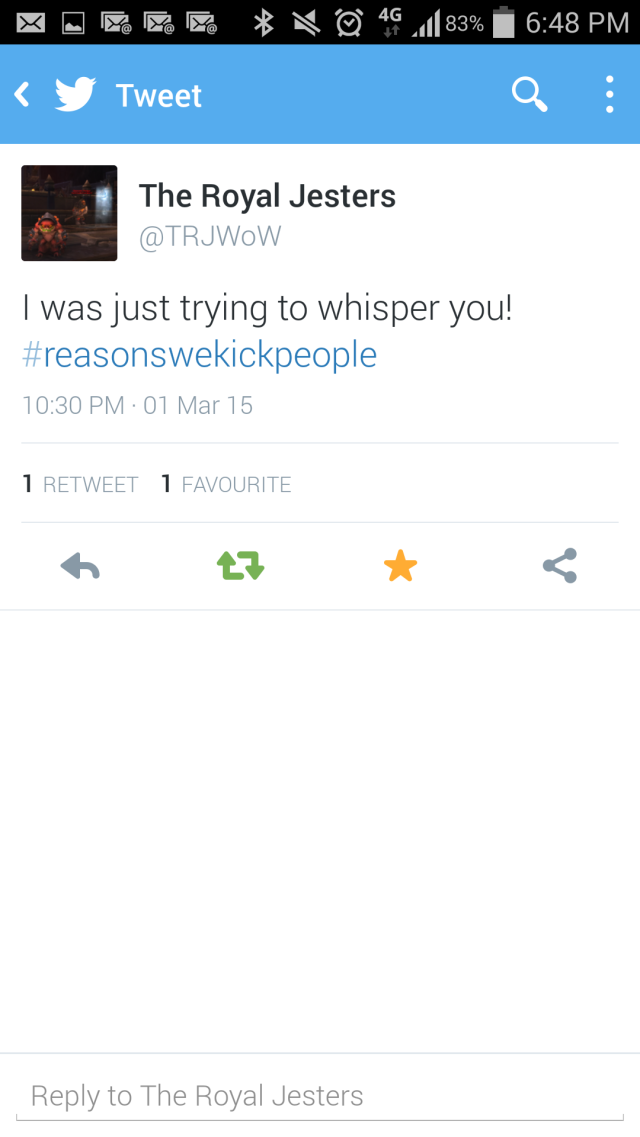 “Take assist away from Ella!”

Literally the funniest thing to happen that night. Still laughing about it today and now immortalised on Twitter due to the ability to tweet in game.
No mistake will go unnoticed now! 24 hours later and I still can’t remember why I wanted to whisper him!