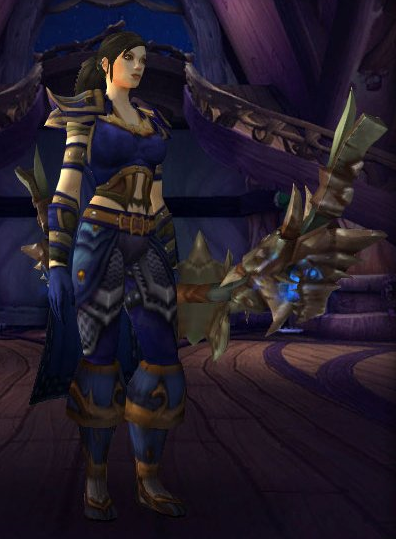 I have had this blue transmog hanging around for a while, I”ve never really had a situation where I felt that it would look appropriate to the scenario unfolding in game but with the Red v Blue going on in Battle for Azeroth, it might be a good time to dust it off.

Here is the pieces required to get this mog:

Helm: Hidden obviously, need that pony tail to bounce freely!
Shoulders: Khaz Modan Monnions. Three parts into a quest chain that gets you to Arathi from Wetlands and these suckers will be yours.
Chest: Expedition Scouts Hauberk. Last in the questchain that is the intro into Northern Stranglethorn.
Back: Proudmore Cloak. Only two quests needed in Theramore to get this one. Speak to the Bronze Dragon on the hills on the path leading into Theramore to change back the time to be able to see the place as it was to complete it if you haven’t done it already while levelling.
Hands: Cobrahn Scale Gloves. Quest reward for the Wailing Caverns dungeon.
Waist: Drifters Cinch. Reward from the fourth quest in a questline in Duskwood.
Legs: Nexus-Strider Legwraps. Green trash drop on Outland dungeons. Cheack the AH if feeling lazy.
Feet: Landfall Sabatons. These are Alliance only and given near the end of the Pearlfin Village questline in the Jade Forest.
Bow: Dagryn’s Discarded Longbow. This is the Mythic colourway of this bugger. Dropped by Galakras in the Seige of Ogrimmar raid. There are other blue bows if you don’t want or cant get this one. Try this which is part of a quest chain in dungeons/raids.

Don’t forget there are more transmog/slutmog that can be found here.