I have the Gathermate add-on to help me keep track of where all my herbs are without needing to make my self dizzy/lost trying to find them all. I don’t know what keeps happening to it but every so often it wipes all the data and I have to start again gathering everything like a woman possessed until I have a suitable amount of spawn points logged in.

One of the herbs I have never actively collected is Silkweed. As a scribe any pandarian herb is as good as another and I generally just collect tea leaves as they are everywhere. I noticed that I only had a few spots on my map for them and as I had nothing pressing to do (lfr for the newly opened raids wing was an hour wait, so if you add that to the hour extra you wait on top of that, that queue was going nowhere fast.

I confess that I used wow – professions to find out where to go for this herb as all I had were a few spots around some ponds and I couldn’t seem to find any more. The route took me along the top of the Vally of the Four Winds and then down into Krasarang Wilds. 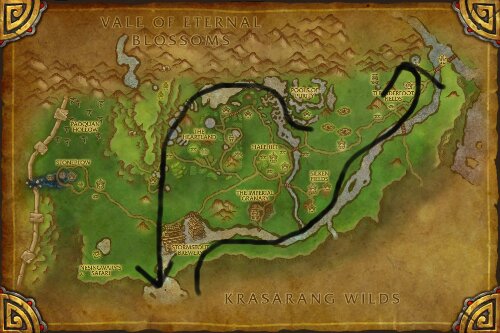 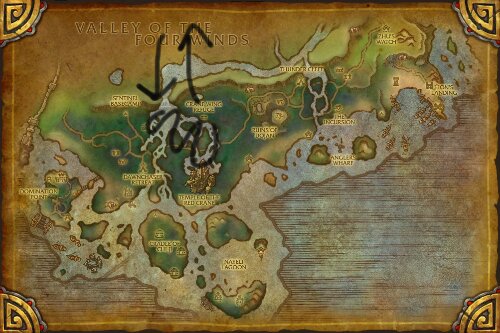 In the bottom image, the squiggle means to just go all over the watery bit as they are no end of Silkweed there.

On my trip I bumped into (quite literally) several Sha infested tigers and cranes. I’ve tamed one of the tigers before as they look pretty awesome being all grey and smokey but alas it didn’t keep the barbecued look upon taming and just turned into a normal tiger. Needless to say it got rage released!

There was a Zandalari Warscout roaming around which caught my attention. I just got my bear out and cleared the lizard people out of the way when he wandered off! Bad Zandalari! I did eventually track him down again after I turned on all of my Hunter tracking options (there’s the downside to being a hunter, sometimes you cant see the herbs for the red dots)

It was am amusing fight and I’m grateful to Verdie telling me about the missdirection macro. The scout was all eyes on my bear and he was throwing his balls of fire at the bear and not me. Things were going peachy until we managed to pull another mob into our ruckus. The balls of fire them started coming for me. My neglect of my bear had left him dead (I always forget to heal him) and I was rapidly losing health. “I’m too pretty to die!” And with that I popped my cooldowns and dispatched him and the other little shit to the great wow graveyard in the sky. After all of that I got a Shadow-Pan rep thingy…

I carried in my way collecting herbs and eventually made my way back up to the river in Four Winds. There was so much Silkweed! After being ambushed by a fox I started making my way along, all my Hunter tracking now back off. Eyes on my mini map and on the floor I really wasn’t paying attention to where I was flying when DBM popped to tell me to have fun. What? *move camera* ooooh… *retreat* 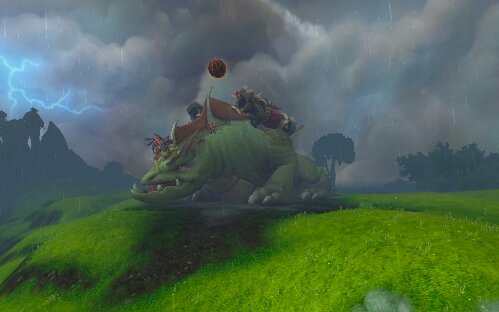 This had caused me to abandon several Silkweed that was around it and after waiting to take the screenshot (waited for lightning to make it extra pretty :3) I had a quick check of my bags and voila! There were about 5 stacks in there! Amazing considering there were loads I would have missed buggering around with the scout and the ones that were a bit too close to danger for my liking.

I don’t think I’ve had a herb gathering trip that has been this eventful in ages. Unless I count when I was being out numbered and ganked trying to farm turtle meat but that may have crossed the line from eventful to annoying…